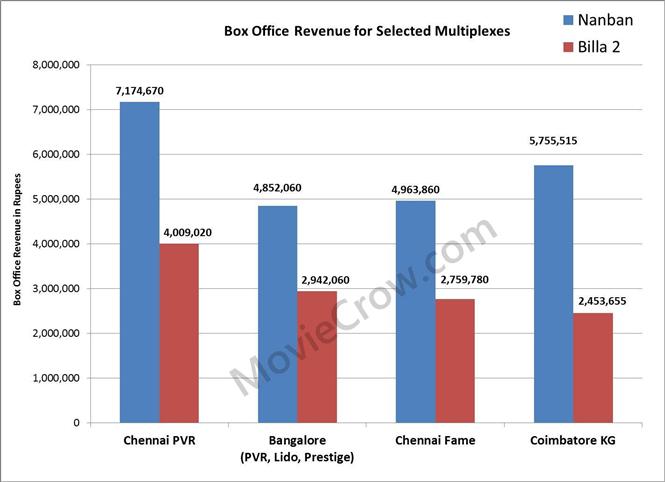 With Billa 2 taking a sharp nose-dive during the 3rd week and only a handful of shows/day in major multiplexes remaining, we tallied the final numbers for Billa 2 to see how it compared against another 2012 big budget movie, Nanban. Based on popular request, we are presenting the Nanban vs Billa 2 comparison report for major multiplex centers in Chennai, Bangalore(3 locations) and Coimbatore. Based on these hard quantitative box office numbers and qualitative inputs from theater managers, it is clear that Billa 2 has fallen short of Nanban in terms of the overall box office revenue.

Multiplex Comparison of Billa 2 vs Nanban

Billa 2 performed slightly better in multiplex centers than in single screens. When compared against Nanban, Billa 2's box office revenues at these major multiplex centers were only 0.6 times that of Nanban. Coimbatore registered the lowest comparative numbers for Billa 2 with respect to Nanban and Mankatha. (To illustrate the point, Nanban made Rs.57 Lakhs; Mankatha made Rs.52 Lakhs; Billa 2 made Rs.25 Lakhs). Nanban was sold for roughly 30% higher cost, which was neutralized by 30% entertainment tax waiver due to U certificate rating. When comparing the distributor share between Billa 2 and Mankatha, the latter did much better because it was released before the tax waiver rule was passed by the state.

Across major centers worldwide, Billa 2 performed the best in in Malaysia, UK and a few other smaller overseas centers. In Tamil Nadu, Billa 2 made average business. Thanks to thunderous first day opening, flooding of prints in the market and Aascar's ability to get a deeply lower negotiated deal for Tamil Nadu. In the US, Kerala, Bangalore and AP, it is unfortunate that Billa 2 lost money for its investors.

Note: Based on the final tally of numbers across major centers, the box office status is corrected down to "Average". 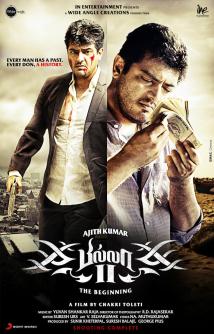