You see a man who’s obviously wounded and writhing in pain stopping a bus and heading to Kochi, during the journey we realize how and why he got wounded and where he is headed to now. In the process we also come to know of his journey in life so far and the people around him. Does it sound something extraordinary? Not really to be honest, right? Well that’s how cinematographer turned filmmaker Rajeev Ravi’s third film as a director, Kammatti paadam begins. But let this not worry you as the preamble doesn’t fully prepare you for what’s really in store for you for the rest of the film.

While Annayum Rasoolum was a slightly unconventional yet realistic romantic film, Njan Steve Lopez was more of a coming of age film with a clear social conscience attached. This time around in Kammatti paadam Rajeev once again tries something different, a tale of gangsters and crime based in Kochi and spread across three decades.

The film talks of Krishnan (Dulquer Salmaan), a 40 year old bodyguard/security guy in Mumbai who decides to go back home after a long time on receiving a couple of calls from his old friend Ganga (Vinayakan). Krishnan perceives that Ganga is in danger and hence wants to trace him out and help him if necessary. As the tale unfolds we see how Krishnan and Ganga along with their friends from childhood go on to work with Balan (Manikandan) and slowly but surely enter the world of crime.

Rajeev makes use of the non-linear approach in narrating the story as he keeps switching between the past and the present in an elegant fashion, with even the past being spread out over various years, giving us glimpses of Krishnan in various stages of his life. On the one hand it might remind us of some of the Bollywood underworld stories or even Anurag Kashyap’s Gangs of Wasseypur for the way the narrative unfolds over a long period of time. But these are mere influences if any and Kammatti paadam remains an original tale, a tale of crime, deceit, friendship, love and much more.

In a small way the film makes one think of Srinath Rajendran’s Second Show, Dulquer’s debut film.  But well there is enough in Kammatti paadam which makes it distinguish itself from the other films. We get to see a side of Kochi that’s hardly seen in films and DOP MadhuNeelakandan’s cinematography does wonderful justice to the locations. Watch out for the color palette used in the film, it certainly gives a very raw and edgy feel of sorts which works.

The music (both songs and BGM) by K, John P. Varkey and Vinayakan is quite commendable and compliments the writing by P.Balachandran (who also appears as Krishnan’s father in the film). But the film isn’t without its set of issues and it’s good to be aware of them in fact.

At a run time of 177 minutes it’s quite a long film and also paced a little leisurely. So it’s not a surprise to hear some people complain that it’s lengthy and slow, but for the discerning viewer these are not things to be bothered about. It’s also quite a violent film and the A certificate given to it is with a valid reason, so please do not make the mistake of taking along your children or anyone who is not fond of violence on screen.

The film has a host of wonderful characters, most of them being utilized quite effectively and strategically by Rajeev Ravi.  Shaun Romy as Anitha and Amalda Liz as Rosamma play very well etched characters in the film and they do leave an impact. Dulquer Salmaan does very well enacting Krishnan, a not so simple character; he is definitely continuing his good form indeed. But the show stealers in the film are Vinayakan and Manikandan, both of them carrying out their roles in a manner which conveys passion, raw energy and conviction.

Ultimately Kammatti paadam is an interesting attempt by Rajeev Ravi and there are enough and more reasons which make it worthy of an outing at the cinemas. 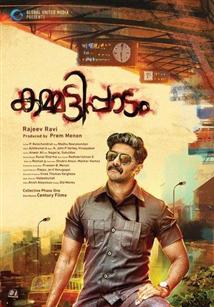