2012 MovieCrow Award – Best Villain
The distinguishing line between a ‘Hero’ and ‘Villain’ is diminishing in Tamil films. It is because more films are plot-driven and not hero-driven, which is a healthy sign. Also, more movies leaned towards comedy and love in order to safely get "U" certificate (for entertainment tax waiver). As a result, action movie with strong villains were hard to find in 2012. But, we did see a few powerful villainous acts which brought out the best from the heroes.

Sudeep in Naan Ee did an outstanding job and easily the ‘Best Villain’ of 2012. He had to act with a non-existing house fly as it would have been added only in the post-production stage. He portrayed varied villainy, fear and lust so effortlessly. Sudeep also dubbed in his own voice.

Vijay Antony had the guts to do a role with negative shades in his debut film as an actor. He was more than convincing in his role and people have taken notice of his acting skills.

Vidyut Jamwal impressed everyone with his killer looks and underplayed villain acts. He is considered as one of the brainy villains in the recent past.

Mithun Murali excelled in his negative role as a school student. He looked very real as a rich spoilt teenage person. He looked very confident on screen. Thanks to Balaji Shakthivel who extracted exactly what he wanted from this newcomer.

Sachin Khadekar was convincing as a genetic scientist. He showed his obsession with unleashing the power of his research and also had enough scope to perform in his last confrontation scene against Suriya. 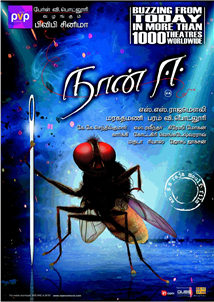