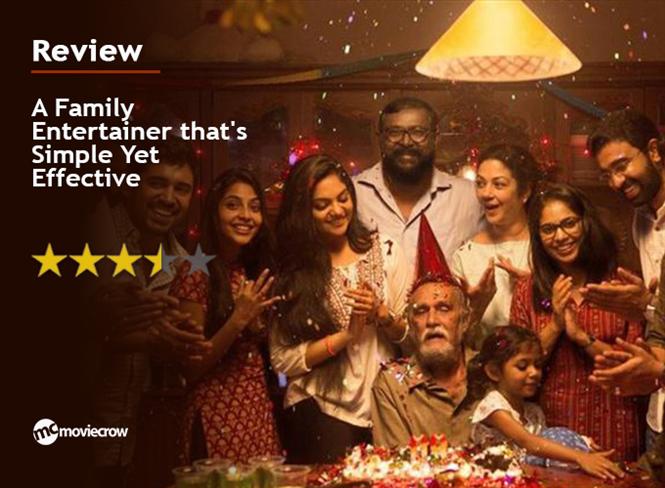 What could be the link between Newton’s 3rd law of motion and a life threatening disease? Or what could be the link between the law and a whole family’s anxiety? Before you start feeling that I’ve gone bonkers, let me tell you that this directly a reference from Althaf Salim’s Njandukalude Nattil Oridavela (NNO from hereon) featuring Nivin Pauly, one of the Onam attractions this time. The situation in which Newton’s 3rd law is mentioned or discussed in the film is witty but in a subtle manner, more in flow with the overall style of the film. There are hardly any films, especially family entertainers which talk of death and a life threatening disease in a casual yet spirited fashion; most of the times we tend to see the representation being shown in the form of heavy emotional scenes. But then here’s where Althaf Salim has gone on to be different in his very first outing as a director.

Earlier noticed as an actor in films like Premam and Sakhavu, NNO sees him collaborate once again with Nivin Pauly, this time the star is not just the hero of the film but also the producer (his second outing as producer after Action Hero Biju). This Onam sees an interesting contest at the box office and apart from Nivin Pauly there are also films from Prithviraj, Mammootty and Mohanlal in the fray. But thankfully all the 4 films seem to be quite different from each other and hence it’s now a case of the audience choosing the best option among the four as the winner. The pre-release buzz for NNO has been quite good and with a prestigious outfit like E4 Entertainment coming on board as the release partner; it only made me look forward to the film all the more. Naturally it’s by default that this turned out to be the first of the Onam releases that I ended up watching.

The Chacko’s are an affluent family in Kochi, where everyone appears to be happy in their respective areas of work and activities. But all of a sudden things change when Sheela Chacko (Shanthi Krishna in a comeback) suddenly fears something and requests her London based son Kurien (Nivin Pauly) to come back home immediately. Chacko (Lal) and the rest of the family members are puzzled regarding the same, even as Kurien returns back. So what exactly is the cause of worry for Sheela and how does this revelation go on to impact the whole family? We get to see all these and more as the tale unfolds. It appears that Althaf Salim has been pretty clear about what he has set out to achieve. In fact if you are expecting an out of the box concept in terms of the plot, let me warn you that this film is not going to give you that. But in all probability by the interval you are likely to be hooked to the proceedings on screen, even wonder at how a simple slice of life incident of sorts can be presented so well.

Althaf Salim’s writing appears to have a minimalist approach in a way, on seeing the film one would notice that there is absolutely nothing grand in terms of the situations or the dialogues, it’s actually easy to relate what appears in the film. It’s just a simple slice of life tale that does not pretend to be anything outstanding, Althaf seems to have kept the expectations of the family audience in mind, an endeavour in which he has mostly succeeded. If in case you are someone who is expecting an out and out Nivin Pauly show then here’s a word of caution, indeed Nivin does play the hero here but then the plot does not revolve around him as such. In a way it’s actually very encouraging to see Nivin the producer not hogging the limelight completely, in fact the first half especially belongs more to Shanthi Krishna. NNO is the kind of film that flows with a subtle undercurrent of humour all the way through.

The romance element in the film (Nivin Pauly and Aishwarya Lekshmi) is visible in a brief but breezy manner and Aishwarya Lekshmi as Rachel gets noticed. Ahaana Krishna and Srinda Arhaan who play Kurien’s sisters get adequate scope while Dileesh Pothan and Saiju Kurup as Chacko’s dentist nephew and the oncologist respectively are effective. The Premam team makes its present felt; the cast of NNO includes Siju Wilson, Krishna Shankar and Sharafudheen, all of them playing roles of substance. While we do see Lal playing a dad on screen often, here for a change he plays someone who’s a little low on confidence and fearful of everything. This brings me to Nivin Pauly who is once again charming in a goofy character of sorts, his slightly out of shape look could initially be a little alarming but it goes well with his character.

Althaf Salim makes a confident debut as filmmaker with NNO, signalling to us that he is a talent to watch out for. If you are looking for a pleasant outing at the cinemas this Onam, then this is a good choice indeed. 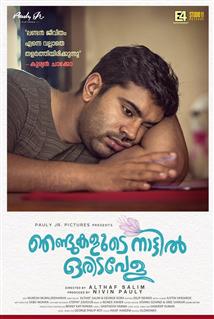