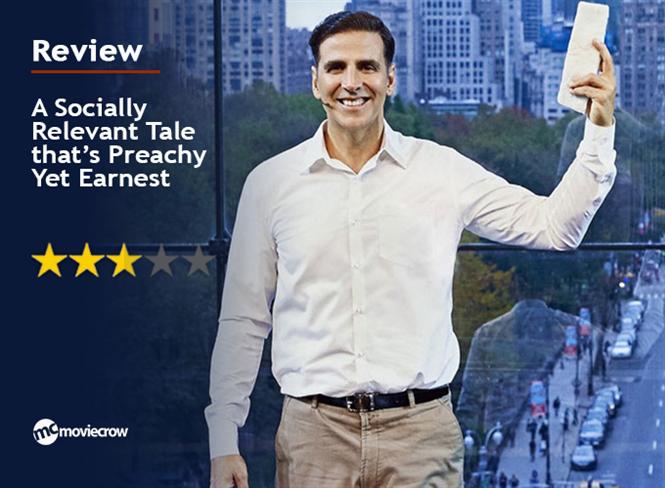 R.Balki’sPadman does not waste any time in setting up the premise and that is definitely a positive factor in favour of the film. The film begins with the soothing “Aaj Se Teri” (composed by Amit Trivedi, written by Kausar Munir and sung by Arijit Singh) whereby we see Lakshmikant Chauhan (Akshay Kumar) getting married to Gayatri (Radhika Apte) and falling for her very soon. In the latter half of the film we see Pari (Sonam Kapoor) succeed at something that Lakshmikant could never manage till then, convincing women to try out his sanitary pads. The simple yet effective manner in which Pariconveys the reason to Lakshmikant is a lovely moment from the film. Another interesting moment is one where Lakshmikant and Gayatri are in front of a Hanuman idol in a local fair. While Gayatri is all impressed by the way the idol is shown to be breaking coconuts inserted into its mouth, Lakshmikant instead is only pleased to realize the technique involved in the same. Thankfully Balki manages to ensure that the film has quite a few such moments that hold our attention.

Based on the true story of Arunachalam Muruganantham, a social activist from Coimbatore and inventor of a low cost sanitary pad manufacturing machine, Padman sees the action shift to Maheshwar in Madhya Pradesh while otherwise mostly staying true to Arunachalam’s journey. Seeing his wife’s dependence on cloth during her menstrual periods, Lakshmikant is alarmed and requests her to use sanitary napkins instead of cloth keeping the hygiene factor in mind. But Gayatri refuses to use the pads due to the prohibitive cost which prompts Lakshmikant to come up with a cost effective solution himself. However to bring about a radical change in mind-set among people who thrive upon age old beliefs and traditions is never easy. And this is something that Lakshmikant realizes the hard way as he faces hostile rejection from nearly everyone around him. How does Lakshmikant go on to tackle the obstacles and end up as India’s Padman is what the film is all about.

Though the narrative does not waste any momentum in terms of getting to the crux of the story, what is also seen is the preachy mode adopted especially in the first half.Resembling a cinematic version of a government endorsed public service communication of sorts; the film goes about explaining things a tad too much and for too long. However the writing by R.Balki and Swananand Kirkire does ensure that the film does not suffer too much on account of the same. The second half of the film brings in a balancing act organically and some interesting moments along with the spirited presence of Akshay Kumar does ensure that the film is engaging overall. P.C.Sreeram’s cinematography is effective and so is the music by Amit Trivedi. The choice of locations adds to the rooted nature of the tale, lending some authenticity to the proceedings.

Both Radhika Apte and Sonam Kapoor have important characters to portray in the film, Gayatri and Pari being people who create a huge impact in the life of Lakshmikant. Both of them bring out a strong contrast in the kind of characters that they essay and also the style and poise that they carry. Radhika Apte looks very real as the wife who’s deeply in love with her husband but yet unable to move away from age old practices, so much so that we almost end up fighting the urge to ask her what’s wrong with her J. Sonam Kapoor lends grace and charm to Pari and shares very good chemistry with Akshay Kumar. Though the culmination of the tale does bring in a cinematic moment or two between Pari and Lakshmikant, thankfully it is not over done.

Akshay Kumar is very much in his element as he portrays Lakshmikant with a lot of warmth, dedication and conviction. While his emotional scenes do generate an impact, in particular his address at the U.N where he launches into Pidgin English (which he himself labels as Linglish) sees him impress us convincingly. The address touches all the right chords and makes us smile and yet take away the central theme of Lakshmikant’s journey very effectively. Padman is definitely one of Akshay’s better works, something that reminds us that he is indeed an earnest actor. Padman isn’t an outstanding film, but it touches upon a topic of extreme relevance and Balki thankfully handles it with a good amount of sincerity which works in favour of the film.

Padman sees R.Balki and Akshay Kumar coming together to talk about the extremely sensitive and important topic of menstrual hygiene. Managing to strike a balance between a slightly preachy first half and a controlled yet entertaining second half, the film does leave an impact. 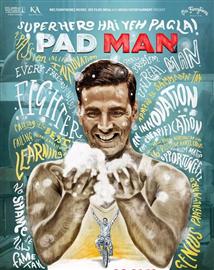