Sanju Review- A biopic that prefers Humanizing over Idolizing! 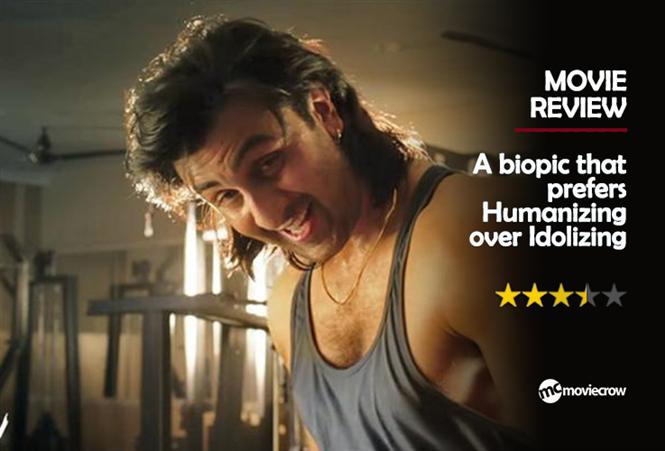 Sanju Review- A biopic that prefers Humanizing over Idolizing!

Hirani opens his biopic on Dutt with the most honest assurance scene to the audience. He brings in a character that writes Sanjay Dutt's autobiography by comparing him with Gandhi. Sanjay thrashes him down and burns the book to flames which in turn gives us a clear picture of the notion behind this film. SANJU is not made to glorify Sanjay Dutt as Mahatma.. but takes him to us like every other conflicted human being. It brings him as a son, as a friend, as a heartbroken lover, as an actor and as a star who has seen rise and fall in all its height and depth!

We hear a character uttering a line to Sanju - "Bad choices make good stories. You are the king of bad choices!". This very line can be the metaphor for Hirani's take on Dutt's life as well. He explores the human side behind Sanjay's choices.. over his drug consumption, over his friendship with God (wittily named for a Satanic character, a drug seller played by Jim Sarbh), over his connection with terrorists.. He presents Sanjay Dutt as a protagonist who never gave up and let us decide whether he is a hero or not. And by the end of the film, he makes sure that we all hush to the people nearby, "Man! This guy is a hero!"

The film is structured around the attempts of author Winnie (played by Anushka Sharma) collecting information from sources close to Sanjay, to write an honest account of his life despite so many questions being unanswered. At one point, we do feel that the entire film is based on questions! First, it is about whether Winnie will agree to write Dutt's biopic. At intermission, we are left with a WHY about RDX being stored at his house. Later, the film revolves around the legal battles - Is he a terrorist?, Will he get his bail and come clean out of the charges?. At one point.. Sunil Dutt, (brilliantly retraced by Paresh Rawal) complains to a presshead that they will escape with false accusations just because they add a question mark at the end of their headlines like 'Is Sanjay Dutt a terrorist? Has Sanjay's career finished?'

Hirani stamps his signature elements all over. There are larger than life exaggerations! The fact that no one was willing to hear Sanjay's story is shown with him talking to a literally sleeping minister. There is a constant river of dramatic sentimental melodrama that veins over the entire first half clutching Sanjay's attachment to his mother and father. There is his trademark humour that lightheartedly fantasises the most nightmare segments like one where he is supposed to meet an underworld aatmi! Like.. The guy who holds a magazine page with an actress for Sanju to romance before camera accidentally drops it down and holds a page with Gabbar Singh's image.. We chuckle when we hear God sells his drug with a line.. "I had this once and my Pomeranian turned into an Alsatian".

Unlike Mahanati, that documented a fullfledged life or an Iruvar, which fictionalized real life.. Hirani opts to pack explosive emotions in nutshells through his scenes. In that way, Sanju is more fascinating because of the vastness of imagination one is put into with every character's performance. We get to see Nargis Dutt imitating Marlon Brando of The GodFather and De Niro of Taxi Driver and Vicky Kaushal imitating Ranbir himself. The bromance between Vicky Kaushal and Ranbir balances for the lack of romance in the film. The depth of their relationship is beautifully elicited by Kaushal's performance. He comes off naive, vulnerable and all good as a friend! Almost every single character shines with the intensity of their depictions except for Sonam Kapoor, who can put the viewer off right in the very first frame. The moment we see her waking up in the most artificial way with full on makeup, we are like, 'Oh Girl! Not you again!'.

Surprising thing about Sanju is it hardly comes into the Cinema episode of the actor's life. Except for his first film, Rocky and his career changing Munnabaai M.B.B.S.. we don't see him at the sets. Even the songs are blended into the narration. Hirani use them as a lens to magnify every chapter of his life. Ruby for his drug phase.. Kar Har Maidaan Fateh over his rehab period.. The background scores at certain scenes also represent the melancholic, sentimental Indian BGM period of 80s and 90s. Apart from this.. there is an interesting anecdote about classic songs throughout the film where Sunil Dutt helps his son to overcome his issues with songs he grow up listening to.

However, with the second half, we are forced to listen a victimwala's confession kind of narrative. One might get a feel as if Sanjay Dutt himself has directed towards the end. The entire Dutt talking over radio in the prison is to tell us all "Give him a listen! Sanjay Dutt is innocent!". The film suddenly shifts gear to the paparazzi nature of media and its urge for gossips and headlines. And it is difficult to deal with this narrative shift but Hirani still manages to cut it off cleverly by hovering back the story into 'Did the two friends unite together?' angle.
All said and done.. it is Ranbir who devastatingly paints a glorious image of Sanjay Dutt on screen. We have seen films where actors undergo rehab to come out of addiction. But Ranbir has done it to his blood and flesh. The shivering.. The giddiness.. The tiredness in his face reads out the lost soul Sanjay Dutt is! It is hard to resist crying in many sequences like one where he is made to listen his mother's tape.. one where he can't seclude reality and illusion.. He portrays a destruction that is upright opposite and contrast to what he pulled off as Jordan in Rockstar or Ayan Sanger in Ae Dil Hai Mushkil. He holds a phenomenally polarised character so composed with his gestures and body language. The complexity of the character never comes to us as Ranbir's performance as all we see is SANJAY DUTT! In a lead to the song sequence, Ranbir as Sanju says, "My father thinks I cannot lip sync to a song. He is wrong. Watch me!". Probably, that's what Ranbir does in the film. He wipes away all the criticisms from the nation at one go and says, "Watch me!"

Bottomline
Rajkumar Hirani's SANJU with Ranbir in his deadliest form, is a story of one lifetime that stretches over periods in bringing us a person's relationship with his father and a friend. When we sit in front of the screen, expecting the biopic to idolize Sanjay Dutt.. Hirani surprises us all by humanising him!
Rating: 3.5/5