The makers of AndhaDhun have released the trailer of director Sriram Raghavan’s new film, starring Ayushmann Khurrana, Tabu and Radhika Apte in the lead roles. The gripping, intriguing and brilliant trailer has won raving response from both the audience and critics alike.

Director Sriram Ragavan who has 'Johnny Gaddaar', 'Ek Hasina Thi' and 'Badlapur' to his credit has come up with another edge-of-the-seat thriller. Ayushmann Khurrana plays a blind pianist who gets embroiled in a murder mystery. Produced by Viacom 18 and Matchbox Picture, AndhaDhun has been scheduled for an October 5 release. 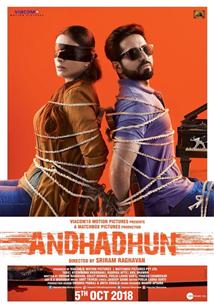