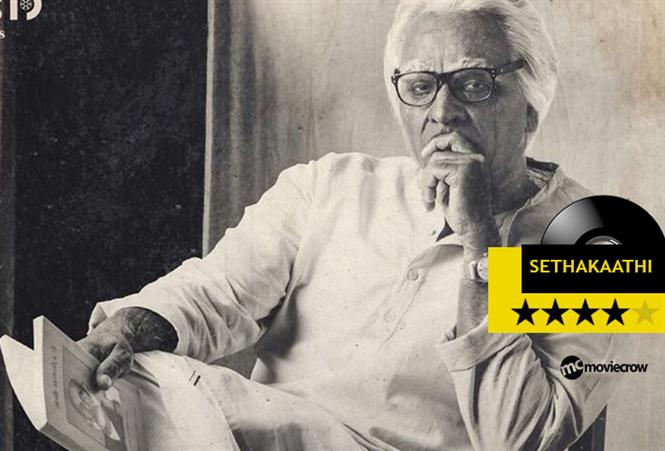 I am surprised by Govind Vasantha's approach to a song. He is really breaking certain norms and conventions we been having about intro numbers or duets or a heartbreaking pathos track. Despite having good lyrics and some beautiful rendition of vocals.. after years and years.. with his songs, we really see music carrying the emotion of a song without any catalyst in between. After 96, Seethakaadhi is even more a genius showcasing and a step ahead move by Govind in letting out his music in its most purest form!

Ayya : The heavy drumming and guitar riffs that open the track declaring 'A STAR HAS ARRIVED' gets a terrific upbeat with its lyrics. Thiyagarajan Kumarraja's choice of words comes as a blow of surprise. The folk, Nadhaswaram that joins for the interlude building up the frenzy of fanatics is followed by a voiceover by the character Ayya himself. The rap-like rendition of the same that comes up next is brilliantly packed. The super trippy number is sung by Vijay Prakash.

Avan : The rendition of Harish Sivaramakrishnan is deistic. Madhan Karky's lines like "Thee thindra piragum.. Avan theeravillaiye thuliyum! Mann unda piragum.. Unnulle ulle avan mulaikkiraan!" glimpses you the brief you need to know about the character. It is good to hear a lyric holding the innumerable possibilities of imageries to it. "Paavam ammaranam.. Adhan velai kedukkiraan" captures the sense of immortality of art that the film tries to address. Govind Vasantha's innovative choices for interludes are unconventional. The breathe beats that occupies till the charanam starts stamp a heavy mood in its own to the song.

The Journey of Ayya : This instrumental piece with acapella of hummings forms the core theme of the film. The emotional depth the flute at the middle or the violin that follows wave to the track is so serene. The last time I heard a theme music in the film that doesn't care much about the commercial viabilities was in the instrumental pieces of UttamaVillain by Ghibran. The commotion of Tabla, Violin and the hummings towards the end is soulful that you feel like you are in the world of the film!

Kozhi Onnu : The mock number about the stars who wanna make the industry revolve around them (In a parallel world, this can be declared as an anthem for parallel cinema!) is sung by Pushpavanam Kuppuswamy. The innocent, common man quality in his voice proves how on point the choice of vocal is. Yugabharathi's lyrics are funny yet they are powerful about what they mean. "Kayir illaamal ennaalum ponnaana oonjal aadaathe!", "Rasam illaadha kannaadi nammoda moonja kaattaadhe!" and such many pieces quirk all over.

Isai : Easily the best track of the album.. 'Isai' is all music. There is no vocal. Just nature sprinkled all over a piece of flute. The song opens up like that of a Carnatic ghazal you would hear over sobbing late nights. There is rain and ambient thunder sounds beneath the music. This number lets your mind at rest and begins a conversation over music. The piece is so pure that you really get moved by how unadulterated the soundtrack is!

Theme of Seethakaadhi : Like 'The Journey of Ayya', the theme track is again a beautiful ensemble of music and hummings. It really sulks you in when the chorus humm risen up. And.. there is just one line in the entire track, coming at the end.. "Kalai saavil mudivadhillai!"

Bottomline : With the soundtrack of Seethakaadhi, one can get that Govind Vasantha really puts his heart and soul in making a film come alive with his music. From being unconventional with a supposed to be a mass number like 'Ayya' to delivering an unpolluted piece of music like 'Isai'.. the album really stands shining among the best soundtracks of the year! 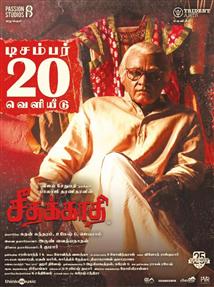