Actor Simbu's upcoming film Vandha Rajavaathan Varuven which is gearing up for a release on February 1, 2019 had its trailer release recently. The album has been composed by Hiphop Tamizha Aadhi and Saregama Tamil holds the audio rights of the movie.

A comedy-drama about a grandson trying to reconcile his estranged family, the movie was originally written and directed by Trivikram Srinivas (Attarintiki Daredi) and its Tamil version is directed by Sundar.C and features Catherine Tresa, Megha Akash among others.

VRV is produced by Lyca Productions and is certifies a clean U. 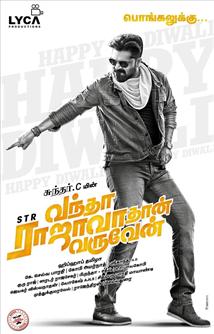