Checkout the first video song Poster Lagwa Do, a revised version of Akshay Kumar's 1997 song from Aflatoon, from the upcoming movie Luka Chuppi.

The song is composed by White Noise Studios with vocals of the duo and Mika Singh ,Sunanda Sharma. The film is directed by Laxman Utekar.

Kartik plays the role of a star reporter of a local TV channel and the film is scheduled for release on 1 March 2019. The film also stars Aparshakti Khurana, Pankaj Tripathi, and Vinay Pathak and is produced by Dinesh Vijan. 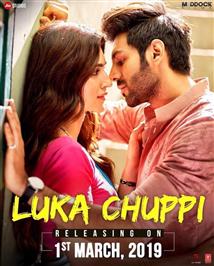