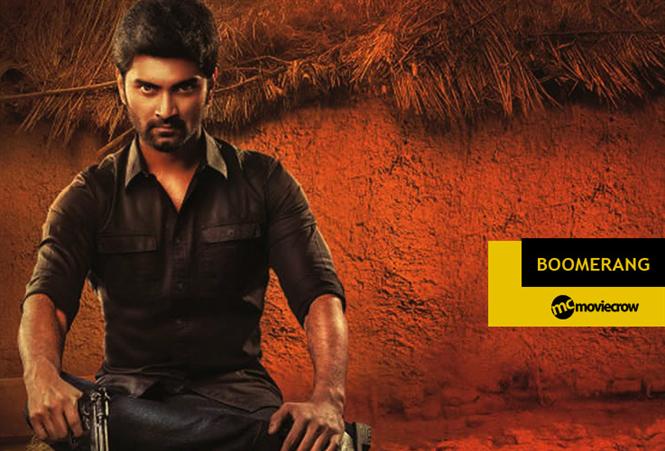 Actor Atharvaa’s next directed by R.Kannan that also stars Megha Akash, RJ Balaji, Satish and Indhuja is the film that deals with the issue of water scarcity titled Boomerang. Although the core of the plot revolves around water, a lot of elements have been woven into this two hour long film to provide a commercial package. Has the film engaged its audiences and stayed genuine to its genre?

Boomerang starts off with a strong sequence that jumps right into the characterization, back story and the major USP of the film that is face transplant of the protagonist played by Atharvaa. This very start gives us some good vibes about the film and that we have entered a movie with a strong script. A few scenes into the first half and we have Satish and Megha Akash who serve as the humour and romance aspects of the film.

Though the core subject is something serious, Satish’s one-liners do work here and there and Megha Akash has a track of romance that does not seem too force fitted. Post this, there are barely any commercial elements that seem unwanted and the mass sequences that Atharvaa has been given in the form of a couple of fights, are quite enjoyable for the general audiences. Apart from one usual love track, the first half is a breeze though the crux of the film is left for the latter.

The issue of water and the true subject of the script comes to fore in the second half. It is safe to say that director R.Kannan has packaged Boomerang with almost every element in near perfect proportion and this is what keeps the audiences engaged. Though there aren’t jaw dropping twists in the latter half, there is barely anything to complain about and the show keeps going on. Some noteworthy scenes include the police station sequence and the collector office scenes. If for more such moments, Boomerang might have been more intense for the viewer.

The technical department scores big as we have cinematographer Prasanna Kumar who provides exactly what the director would expect from him. Music by Radhan too, is pleasing and the introduction and climax songs have a very seasoned flavour that elevates the visuals. Edit by Selva RK is apt and the first half work is commendable. The second half has a few preachy moments and one would think this portion could have been trimmed a tad bit. However, the script’s core is delivered by this half and hence it seemed longer than the first.

Indhuja, who has a good supporting role to play in the second half, does a neat job and RJ Balaji who is always seen playing the hero’s best friend, has a little more serious stuff to do in this film. There is a lot of genuine effort in terms of writing and direction and one would accept that there is some research and planning that has gone into the making of Boomerang. If for a few more intense and intelligent moments, the movie would have gripped the watcher even more. Nevertheless, with multiple flashbacks and characters woven into a non linear screenplay narrative, director R.Kannan has delivered a neat commercial film which also touches upon a usual yet essential social issue. Boomerang bounces back to its mark and engages its audiences in predominant parts.

An engaging & commercially packed flick that talks about a usual yet essential social issue. 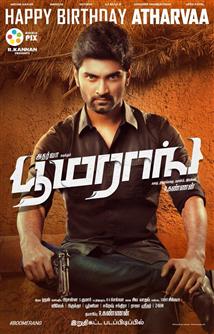