Super Deluxe Review: Life can be a Crazy Circus Alright! 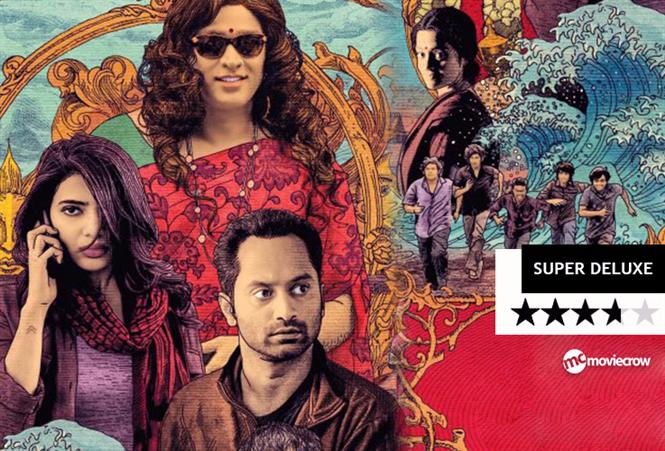 Super Deluxe Review: Life can be a Crazy Circus Alright!

There are a few things happening in parallel in the film, Mugil (Fahadh Faasil), an aspiring actor and his wife Vaembu (Samantha) are a recently married middle class couple who aren’t close to each other. A phone call from an old friend initially makes Vaembu excited, but little does she know that what looked like a lovely day in store would soon turn out to be the darkest day for her and Mugil. On the other hand there are these kids who decide the same day to bunk school and watch a porn movie instead, but what looked like a simple plan to have some harmless fun turns out to be something that they would have never expected even in their wildest dreams. We also get to look at Shilpa (Vijay Sethupathi), a trans-woman who decides to revisit her family after 7 odd years, taking everyone home by surprise by her new appearance. Somewhere alongside there’s also Arputham (Mysskin), someone who believes that it was a divine miracle which saved him from a natural calamity, turning him into a spiritual person who believes that he can heal people with his prayers.

No prizes for guessing that all these stories would have an overlap and that too in an interesting fashion. Thiagarajan Kumararaja’s writing once again proves that handling multiple characters and story arcs in parallel is something that comes to him very naturally (additional screenplay credit being shared here with Nalan Kumarasamy, Neelan K. Sekar and Mysskin). The best thing about Kumararaja’s works is that he’s not out there trying to prove that he’s out on a mission to outsmart the audience, but you would invariably end up getting surprised at some unexpected point when you watch his films. And even for those who have probably watched Aaranya Kaandam on numerous occasions, believe me when I say that Super Deluxe will still end up surprising you. Elaborating on this would be a spoiler exercise and a huge disservice to anyone planning to watch the film, hence let me rein myself in.

While the production design and music (Yuvan Shankar Raja) aspects score high points, the kind of houses and locations chosen and the presence of some old Ilaiyaraaja hits remind you once again of Aaranya Kaandam. A special mention has to be made of the usage of the iconic ‘I am a Disco Dancer’ song in a fashion that’s so retro and yet so cool. Technically there’s hardly a false note in the film, the cinematography (P.S. Vinod and Nirav Shah), sound design (Tapas Nayak) and editing (Sathyaraj Natarajan) shining in their own ways. For a film that’s nearly 3 hours long feel be rest assured that there’s enough and more happening to immerse you with the proceedings. One thing to point out is that there are no conventional protagonists and antagonists in the film, almost all the primary characters get adequate screen time, ensuring that no particular story track gets precedence over the others.

Talking of performances I have this feeling that the casting choices and their performances are going to be discussed a lot once people have watched the film. Vijay Sethupathi gets into the skin of the character with his portrayal of Shilpa, a daring decision for an actor with his kind of popularity. While Fahadh Faasil and Samantha are depicting a married couple with no romantic bond between them, they definitely seem to share wonderful on screen chemistry. Fahadh as Mugil isn’t really stretched as an actor though; this is something that’s a cakewalk of sorts for him. Samantha on the other hand is actually a delight, portraying the slightly confused, slightly simple and yet complicated Vaembu with confidence and self-assurance. Ramya Krishnan is slightly disappointing; unfortunately she doesn’t get enough scope. Mysskin gets a prominent role, however it’s not too different from his previous roles in terms of the style that he follows.

Gayathrie doesn’t get to do much, but she portrays the anguish required of her character very well, without too many dialogues. Bagavathi Perumal is impressive, clearly a good example of casting against type. Aswanth Ashok Kumar who plays the kid Rasukutty is a total delight and he is more than an equal match to all the senior actors with whom he shares screen time. The long wait for Kumararaja’s second film seems to have been worth it after all as indicated by how Super Deluxe has eventually turned out.

Super Deluxe is more than a worthy follow-up act to Aaranya Kaandam from Thiagarjan Kumararaja, a film that’s bold and interesting within the commercial space. 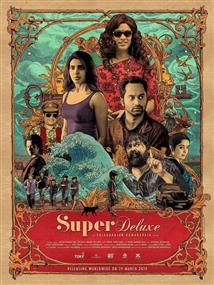