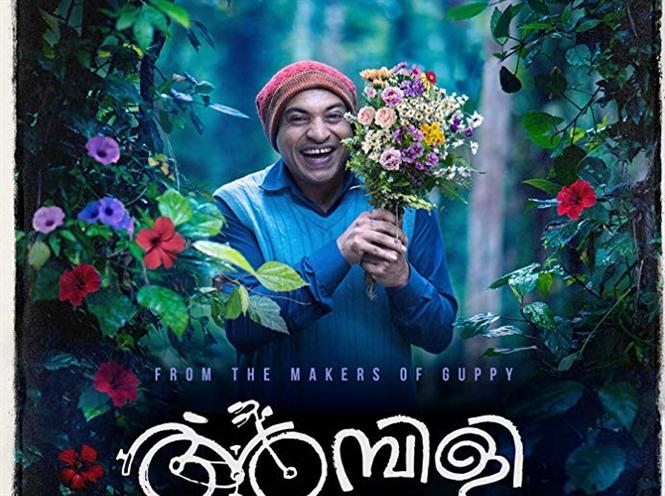 Johnpaul George’s debut film “Guppy” stood out like a whiff of fresh air back in 2016, a film that continues to be talked about. The film may not have had a path breaking story, but it made up for it with the characterizations. Naturally when his second film “Ambili” got announced and with the producers of Guppy having backed this project as well, it did attract attention. Early into the film you realize that Ambili (SoubinShahir) is a simpleton, with a heart of gold. He obviously doesn’t appear to be “normal” for someone of his age, having a visibly obvious childlike innocence. While this is not the first film to feature such an individual in the lead, thankfully it steers very clear of all the films that you have probably thought of on seeing the character for the first time. Later on the film goes on to showcase a road trip, again this is not the first instance of a film about a road trip, but again Johnpaul George tries to give it a totally different spin, adding freshness to the narrative.

Ambili lives in a village in the high ranges of Idukki district, his world revolves around a few people who endear to him. An orphan who now lives alone, his days are spent by talking over Skype to his ladylove Teena Kurian (Tanvi Ram) who works in Delhi. She is someone who has known him from her childhood and for whom his childlike innocence and his otherwise not so sharp intelligence quotient is not a problem at all. Teena’s brother Bobby (Naveen Nazim) is now a popular cycling champion and when he comes home for a visit, Ambili is overjoyed and immerses himself completely in giving his childhood friend a warm welcome. But while Ambili dotes on Bobby, we see that Bobby does not appreciate the attention at all from Ambili and tries hard to stay away from him. Things take a turn for the worse when Teena informs her family about her decision to marry Ambili, something that does not go down well with Bobby. Bobby soon departs on a solo cycling trip all the way from his home in Kerala to Kashmir, but is soon dismayed to find Ambili following him on the same journey as well. What happens to their road trip is what we get to see as the film progresses further.

It is pretty clear from the very beginning that Johnpaul George is not on a mission to enlighten us in any fashion. The writing style adopted by him clearly is that of a leisurely sort and so is the execution on screen as well. The film is in no tearing hurry to convey a point, so this could be a spot of bother for people who are in a rush to get to the crux of the tale. Ambili as a film could have gone in many directions, it could have been a full on romantic tale focussing upon the relationship between Teena and Ambili, it could have been a coming of age tale of sorts for Ambili, or it could have simply explored the friendship angle between Ambili and Bobby in detail. But then Johnpaul has stayed away from exploring the usual routes, preferring instead to just let the audience to get to meet these characters and their world, without getting into too much of specifications.

Hence we never know what made Ambili and Teena connect so well together, but I am glad they do because usually people tend to look at characters like Ambili more with pity, but Teena truly loves him. Similarly, we do not know why Bobby seems to have a dislike for Ambili now, but then Ambili isn’t bothered about the whole thing, an aspect that we as the audience also begin to overlook after a period. SharanVelayudhan’s cinematography does ample justice to the wonderful locations covered in the film, but the visuals do not gain precedence over the subject and the characters. Vishnu Vijay’s contribution with the music is also valuable to the film, the songs go well with the flow of the film. Naveen Nazimcouldn’t have asked for a better debut, he gets a meaty role but then he has a long way to go before he’s able to gain acceptance as a promising actor. Tanvi Ram on the other hand is wonderful as Teena, her debut is sure to get her noticed. SoubinShahir is the soul of the film, he virtually brings to life the character of Ambili, ensuring that the portrayal is without any melodrama or histrionics associated usually with such characters.

Ambili eventually is a film with a heart, go watch it if in the mood for a simple feel good film.

Bottomline: Ambili is a good follow up film to Guppy from Johnpaul George where he is supported in a big way by his leading man SoubinShahir who excels with his performance.