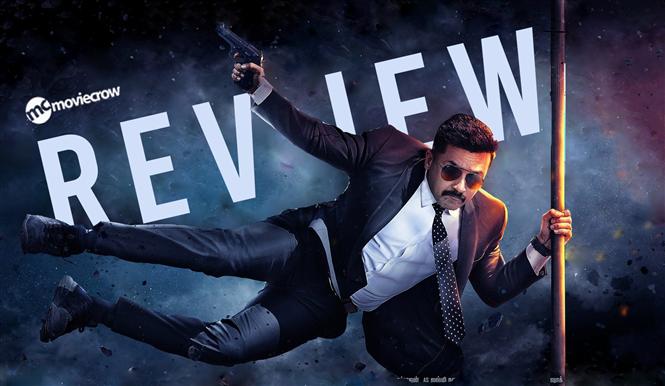 Kaappaan is termed by media as a make or break movie for Suriya. The stakes are high and Suriya can’t afford to miss the target. Will K.V. Anand and Suriya deliver the much anticipated box office success?

Kaappaan is about how an SPG agent protects the Prime Minister of India told in an engaging screenplay with all the commercial elements. The movie can be seen as a simple political action thriller movie or as an intricately layered movie with insights into SPG & PM relations and highly relateable to current political scenario. The choice is up to the audience. The good thing about Kaappaan is it doesn’t lose sight of the entertainment value despite all the background details.

Kaappaan will be a milestone in Suriya’s career. Suriya has transformed his body language for essaying the role of SPG, different from the way he carried the police characters in Singam. His dance moves are consistent with his body language even in the Hey Amigo song. The on-screen chemistry he shares between Mohan Lal is portrayed in a heartwarming fashion. Suriya looks chiseled and his effort in every scene is evident. Suriya introduction scene is in the 2nd shot before you settle in and once again, the director is clearly not willing to pander to the hero build-ups and high speed introductions.

It is tough to imagine any other actor other than Mohan Lal to essay the role of PM. Mohan Lal’s voice modulation and gravitas he brings to the character is exceptional. Mohan Lal has lived the character. Mohan Lal’s dressing style and demeanor will remind Modi and past PMs. Perfect casting choice. It will make you yearn for more shared screen time between Mohan Lal and Suriya. Mohan Lal is a legend for a reason!

Arya is one Tamil actor with no insecurities when it comes to sharing screen space with other stalwarts. He underplays in the first half and provides comic relief in the second half. He plays a key anchor role in a self-effacing manner in the second half. Arya has a tough act of filling in to (really) large shoes.

Every single character is there for a reason and helps carry the story forward. Saayesha looks the part and provides the much needed relief in between twists. She is restrained in her dances in Hey Amigo song. Samuthirakani does a great job in supporting role of SPG. Chirag Jani did his part convincingly. Boman Irani represents the corporate interests and will remind you of Ambanis. Boman's acting is supported by well-modulated voice acting by Nizhalgal Ravi.

As one would expect in all of KV Anand’s movies, Kaappaan boasts a taut screenplay with twists and turns. It is surprising to see how the movie takes a different view into government and corporate's role in issues such as Sterlite protests. The movie starts with the Pakistan situation and later shifts domestically. The movie touches upon the oft-repeated issue seen in movies about corporate versus farmers. Once again, KV Anand proves content is king. The writing is superior with Pattukottai Prabhakar’s fluid dialogues.  Locust attack is an interesting concept (bio war) and effective in instilling fear of dire consequences.

Harris Jayaraj background scores elevate the action scenes while bring down the seriousness of social issue scenes in the 2nd half. It is a great decision to move Kurile song to the end-credits. If Kurilae had been part of the movie, it would have severely impacted the flow and dampened the speed. MS Prabhu’s camera work is swift. However, the London portion looks a bit jaded.

Anthony's editing takes off right from the very first scene and keeps up the pace of the movie. One may feel the movie could have been a tad bit shorter and minus one. The twists and turns will make you overlook a few logic questions. CG work is really good in locust scenes while rushed in a few other.

Kiran’s art work adds to the believability factor of the PM setting. The stunt sequence will be liked by action fans. Suriya’s costumes in songs and scenes look suave. Ganesh Acharya’s dance choreography in Hey Amigo will trigger a new dance style for Suriya, which he seems to groove so elegantly.

The entire movie is like an extended climax.  Screenplay doesn't take a breather and will keep you glued with no time to think between scenes. Kaappaan will give the much needed blockbuster for Suriya. Solid Entertainer.