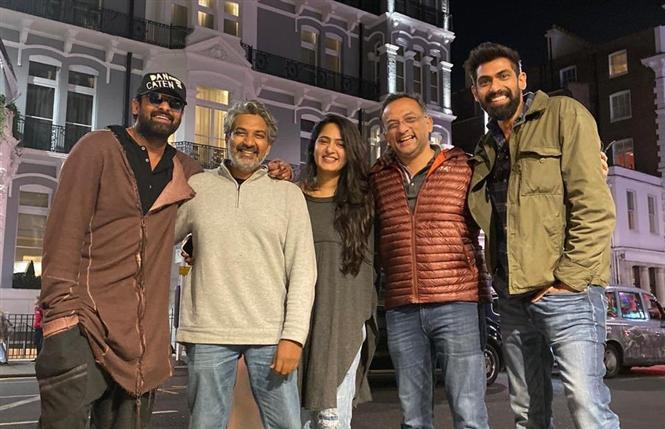 Earlier this month, Prabhas and team Baahubali announced that a unique rendition of S.S. Rajamouli's Baahubali series will be rendered live by the Royal Philharmonic Orchestra at the prestigious Royal Albert Hall in London. The Orchestra is recreating M.M Keeravaani’s score for the film today and the movie's core-team of the director, producer Shobu Yarlagadda, the lead actor, Anushka Shetty and Rana Daggubati are present at the venue right now.

S.S. Rajamouli shared a picture of this 'Royal Reuinon' of the core-team, which is now going viral on the internet. It is worth mentioning here that Baahubali is the first non-English film to have a screening along with this elaborate orchestra and the other two films that are being screened in celebration of Albert Hall's '10 years of Films in Concert series' are Harry Potter and the Goblet of Fire and Skyfall.

An epic war drama series that also starred Tamannaah, Ramya Krishnan, Sathyaraj and Nasser among others, Baahubali: The Beginning and Baahubali: The conclusion both shattered multiple box-office records worldwide and still continue to be one of the most recognized films from India on the International platform.