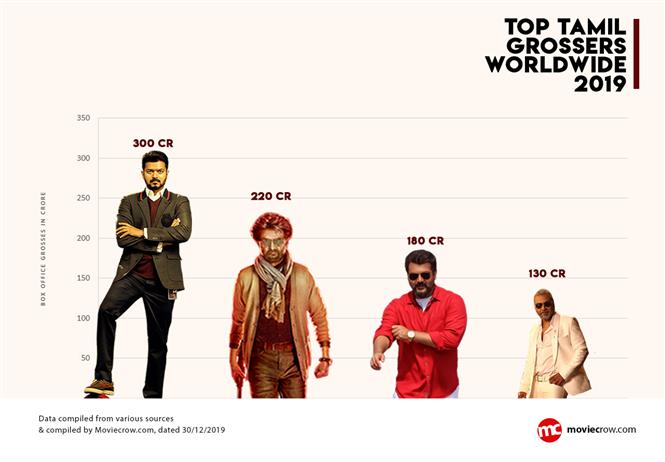 The year 2019 has been good for the top and bankable actors in Kollywood who have made a mark at the Box Office and proved yet again they are consistent money spinners and the biggest crowd pullers. About 180+ Tamil films released this year, out of which 30+ films have been profitable ventures for the makers.

The year started with a bang with two biggies “Petta” and “Viswasam” releasing together for Pongal. Both the films shined and earned a cumulative gross of Rs. 400 cr. A similar trend was seen during Diwali with the release of Bigil and Kaithi which made an overall business of Rs. 400 cr business. The new trend is paving way for a healthy competition among big releases without eating into each other’s business.

Here’s a list of Top grossing Tamil films of 2019:

Vijay’s Bigil with Rs. 300 cr emerged as the highest grosser this year followed by Rajinikanth’s Petta and Ajith’s Viswasam. Vijay continues to enjoy an upward trend in his career following the success of his movies at the Box Office year after year.

Raghava Lawrence’s Kanchana 3 which grossed Rs. 130 cr has proved again that ‘Kanchana’ series is one of the most successful installments in Kollywood for over 12 years. Karthi’s Kaithi and Dhanush’s Asuran turned out to be surprise winners earning the ‘blockbuster’ tag at the Box Office and also reiterating the fact that ‘Content is King’.

The makers of Ajith’s ‘Nerkonda Paarvai’ and Suriya’s ‘Kaappaan’ have confirmed the films grossing Rs. 100 cr and turning profitable ventures for them. Namma Veetu Pillai and Comali had a very good run in TN and has been termed 'blockbusters'. The successes of these films have helped both SivaKarthikeyan and Jayam Ravi reaffirm their positions as ‘bankable’ actors.

Small budget movies with debutants and lesser-known faces have also managed to capture the interest of the audience with its content. Films in this list include To Let, Vellai Pookal, Jiivi.

Sivakarthikeyan’s ‘Hero’ and Karthi’s ‘Thambi’ which hit the screens on December 20 have been excluded from the list as their Box Office status can be determined only after the completion of their theatrical run.

2020 is all set to begin with a bang with Superstar Rajinikanth’s hugely anticipated Darbar hitting the screens on January 9, opening the curtains at the Box Office in the New Year.