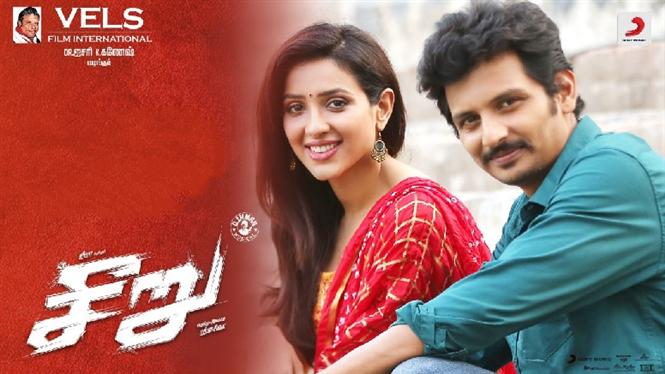 Seeru is an upcoming action thriller movie directed by Rathina Shiva with Jiiva, Varun and Riya Suman in the lead roles. Imman who composed for the director's debut movie Rekka composes music for his sophomore movie also. The album lags far-behind in terms of both quality as well as repeatability when compared to Rekka where Imman was in stellar form.

Shivam Mahadevan debuts as a singer in Tamil with Vaa Vasuki and the vocals have undeniable traces of Shankar Mahadevan especially when he goes as Vaa Vasuki. Though the tune sounds commonplace, the track engages until it lasts mainly due to vocals despite autotuning at certain places.

Kannaala Poduraaley has tiring lyrics from both Viveka and RJ Vijay tries hard to make the jokes amusing. However, Nakash Aziz easily sells this song with his sprightly rendition despite the tune and arrangements from Imman are strictly functional one dominated by Imman's signature racy percussions.

The soundtrack's undeniable highlight is Sevvanthiye and Imman does his best when he channels his Inner Ilayaraja and the composer brings back the memories of Aanandha Ragam from Panneer Pushpangal. The track begins with the lovely solo violin prelude by Karthik Iyer and Thirumoorthy aces the song with his pitch-perfect rendition. The female version's arrangements sound jarring especially with the incoherent mixing of Veena and jazzy soundscape intermittently. However, Vaikom Vijayalakshmi fits the bill perfectly and complements Male version impeccably.

Among the two short tracks, Vasana Poochenda sounds better with all the composer elements intact along with the breezy rendition by Rajaganapathy while Ignite the fire theme sounds predictable and passes muster. One wishes that Imman could have turned Vasana Poochenda into the full-fledged track rather than under two-minute short song.

Verdict: Barring the single gem of the album in the form of Sevvanthiye, Imman's score for Seeru rides on the predictable set of tunes.