Arun Vijay's 2019 hit film 'Thadam' directed by Magizh Thirumeni is set to be remade in Hindi. Arun Vijay was seen in a double role in this investigative thriller. According to reports, Sidharth Malhotra of 'SOTY' and 'Ek Villain' fame has been roped in to reprise Arun Vijay's role in the Hindi remake. The remake will be produced by Bhushan Kumar and Murad Khetani and directed by debutant Vardhan Ketkar. An official announcement is awaited from the makers soon.

Thadam is also being remade in Telugu with Ram Pothineni in the lead role. The film titled 'Red' is directed by Kishore Tirumala. Nivetha Pethuraj and Malavika Sharma have been roped in to play the female leads in this crime thriller and Mani Sharma is scoring the music.

Thadam written and directed by Magizh Thirumeni was produced by Inder Kumar under the banner Redhan – The Cinema People. The film had Arun Vijay, Tanya Hope, and Vidya Pradeep playing the main leads. The music was composed by Arun Raj, with cinematography by Gopinath and editing by N. B. Srikanth. 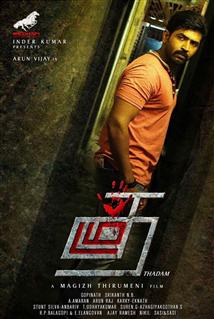