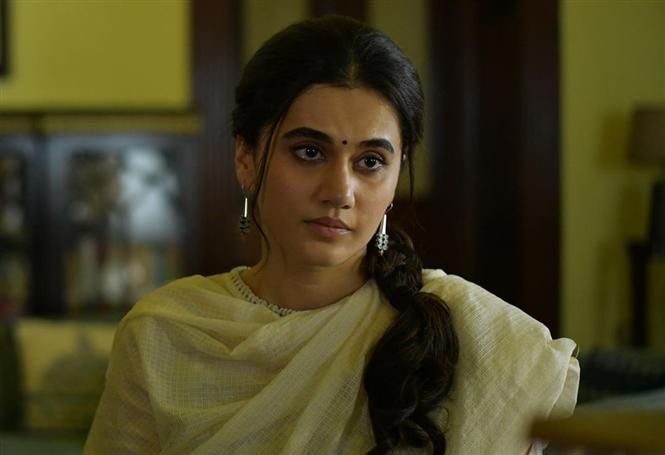 The opening prologue of Thappad is a brilliant stretch. We are shown a sequence of various women from different social strata in their routines. They discuss various issues. One about her freedom. A single mother about her choices. A working woman about her household. An independent girl about her future. A couple about their household. Anubhav Sinha juxtaposes the lives of various people invariably going through a similar current, patriarchy.

After communal intolerance in Mulk and casteism in Article 15, Thappad is Anubhav Sinha's take on the domestic violence. The film revolves around the moment Vikram slaps Amrita and what happens in her because of that. The moments that build up to this point is cleverly written in the narrative. We repetitively see the routine of Amrita. From picking up the newspaper that drops by the doorsteps to making bed coffee for her husband, from making him get ready to feeding him till he gets in to his car.. we see not only how much Vikram is dependent of her but also to much later realize how much her presence made the house what it is.

Anubhav Sinha excels in setting up the ambience of the crawling air of uneasiness in domestic violence. The direction never exploits the melodrama or tries to sympathize the character of Amrita. Instead, he effectively pictures how the domestic violence gradually pulls a monster out of men. We believe the character of Ratna, who plays Taapsee's mother is happy. Much later we get to know how she has voluntarily turned herself down to support the home, husband and kids. The lawyer who handles Taapsee's case, herself goes through emotionally abusive marital life. Sinha lenses all this as snippets but in the large picture, they superbly build a momentum!

Taapsee is terrific as Amrita. The vulnerability she displays makes you really root for her cause. Pavail Gulati as Vikram is equally good. The alarmingly freaking rise in insecurity he feels as he deal with his life in the absence of Amrita is effectively pulled off by his performance. And there is a phenomenal Ratna Pathak Shah. Her command over her performance is a treat to watch. Look at her stopping his son when he mistreats his girl and tries to talk her. In a split second, it says so much about the parenting she would have done all these years.

Soumik Mukherjee's cinematography pictures the unsettling unease in the tale. The moody discomfort that has occupied the house reflects in every moment. Music by Anurag Saikia and the score by Mangesh Dhakde stays in pulse with the rhythm of the film. There is not a wrong step in the craft and language the film holds. And as it ends, you wonder at the nonjudgmental perspective the writer putforth on his characters to pull off such a solid commentary on Indian marital life.