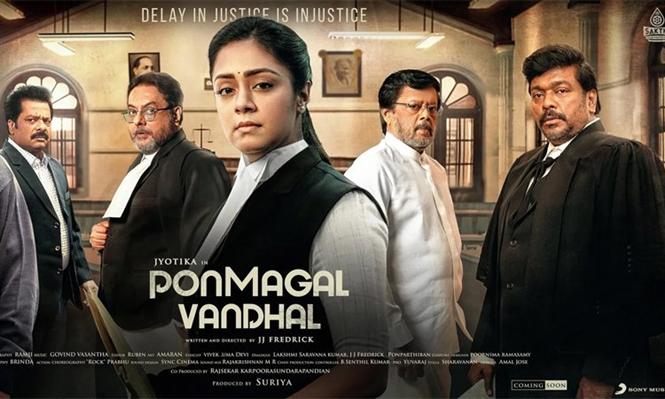 After a long wait with no new Tamil films to watch, Amazon Prime’s big direct digital Tamil release, ‘Ponmagal Vandhal’ starring Jyothika in the titular role is here! Directed by JJ Fredrick, what we are offered on our platter is an out and out genre specific attempt, at a court-room drama with an important social issue touched upon. How gripping is Ponmagal Vandhal for fans?

The film starts off with an incident from 2004, that tells us about 5 children who were murdered by a psycho woman in Ooty district. Incidentally, 15 years later, a young lawyer (Jyothika) takes this up as her first case to disprove the so-called psycho woman (Jyoti) of her crimes. Enter Parthiban (Rajarathinam) the lawyer chosen to battle Jyothika’s argument and he is being hired by none other than Thiagarajan (Varadharajan), a powerful politician linked to this case. The entire film deals with this case and whether Jyothika alongside Bhagyaraj prove Jyoti to be innocent and expose the real truth behind the murders of the children.

For a film that is a court-room drama, we are obviously given limited locations, very few distractions and additives in the form of elements to entertain. For such a film, Ponmagal Vandhal stands tall with respect to its casting equation. Be it Jyothika, Parthiban or the yesteryear stars (K.Bhagyaraj, Thiagarajan, Pandiaraj, Prathap Pothen), we have strong performers for the main roles. This makes sure our attention is well held together by good performances overall and the casting adds up as a major positive.

Another good thing about Ponmagal Vandhal is its run-time. With a duration of just about 2 hours, the fizz required for this kind of a genre film is maintained for a large part and the proceedings seem to be fairly engaging as well. The first half is a breeze and the interval block has a good reveal, leaving the audiences excited and interested in the film.

However, the second half does see some confusion with the way things pan out majorly because of the mix that the markers have tried to achieve. On one hand we feel like sympathising with the social issue touched upon as the intention of the emotion is definitely a much needed and right one. But on the other hand, we are left with a few missing pieces in the puzzle and a not very convincing finish that seemed a tad bit rushed. If the team had stuck to accomplish either of the two, we may have had more clarity and finesse with the intensity not being diluted.

As for the technicalities, Ponmagal Vandhaal seems like a sound film. The cinematography by Ramji is impressive and it sets the mood and tone required. Music by Govind Vasantha works in most places and adds emotion to some scenes. Even the lighting and the overall theme of the entire film seemed a little professional. Ruben’s edit had his usual transitions and the technical team seems to have done a good job.

When we watch a court-room drama film, the most important things to look out for are the issue (case) addressed, the side fighting for & against the case and evidence on both these sides. Considering these factors, Ponmagal Vandhal has a bunch of these elements in the right spots. But the issue that remains is the fact that we are not really convinced with what the law set out to prove.

If for some more smart scenes with respect to the evidence in the case, Jyothika’s Ponmagal Vandhal could have turned out to be a stand-out courtroom film that is an intriguing watch. Nevertheless, this direct digital release has a bunch of positives and a very necessary issue (child-abuse) touched upon, that makes it watchable.