Ram's debut Katradhu Thamizh was a film that won rich accolades from the critics. Over the years it has developed a cult following and members of this cult were eagerly waiting for the release of his next film. With a poetic title and backed by Gautham Menon does 'Thanga Meengal' prove worth the wait?

It is a simple heart tugging tale about the love between a father(Kalyani) and his child(Chellamma). You could even decipher it as the love between two children as Kalyani is as pure and innocent as his daughter. This spotless affection between the two often makes them do things that do not seem practical to the others surrounding them. His zero to near modest earnings often makes Kalyani an object of ridicule and one such circumstance sees him get separated from his daughter as he decides to slug it out and make some money in order to fulfill her innocent wishes.

This is not a film where you can even search for actors. Each of him or her is the character that they play. Ram shines as the innocent and short tempered Kalyani who will not take his self respect for granted. Baby Sadhana as Chellamma is the perfect foil and these two ably carry the film on their shoulders. 'Poo' Ramu as Ram's father comes up with a matured performance that is dignified and beautifully underplayed. Rohini and Shelly Kishore as Ram's mother and wife respectively portray their seeming inability to cope up with the situations quite well. Padmapriya in a cameo impresses.

Yuvan Shankar Raja is the soul of Thanga Meengal. Right from the beginning as the starting credits roll he gets you immersed with his work. The Aanandha Yaazhai song and it's picturisation is something to cherish.

Ram deserves utmost praise for yet another honest effort with Thanga Meengal. He has a simple story to tell and he has gone about it without resorting to any compromises whatsoever. But there is no denying the fact that the film does seem melodramatic in more than one occasion. While the intention might have been to celebrate the innocence of the two primary characters you cannot help but feel more sympathetic to the people around them who are often at the receiving end for no fault of theirs. But on the other hand that does seem the way how it works sometimes in real life. In N number of times in the film Chellamma is shown as gone missing before the family starts searching for her. With such a caring mother and grandparents how is this even possible. And this keeps happening again and again in the film. Ram comes up with a dedication that drives home a message with a slide at the end of the film. But if the intention of this film was to deliver that message then it actually does that more with this slide than with it's narration.

Filmmakers such as Ram are rare and it is pertinent that we support meaningful efforts. Thanga Meengal is a film that deserves our patronage for it's honest intentions and efforts. 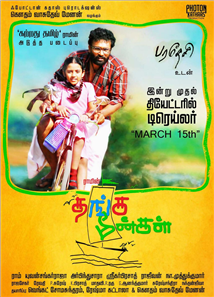