Cut-out for an OTT film! Dhanush fans go all out for Jagame Thandhiram! 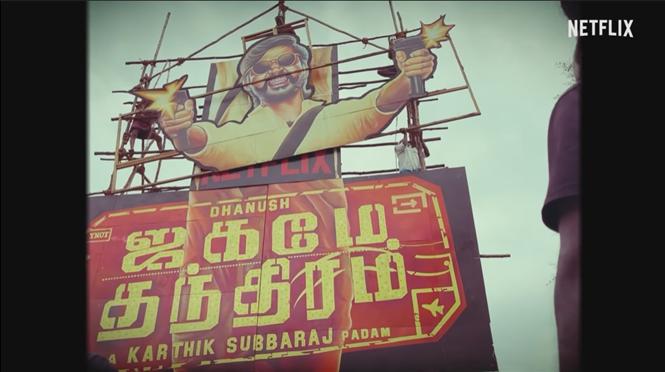 Cut-outs and banners for Tamil stars are not an unusual phenomena but in a first, a Tamil movie gearing up for a direct OTT release has gotten one. Jagame Thandhiram, originally made for the big screens will be premiering on Netflix on June 18, 2021 i.e. this Friday at 12:30 PM.

An unlike Dhanush's previous outing, this Karthik Subbaraj directorial comes with an extra dose of commercialism, so the fanfare surrounding the release has been more light-hearted. After a graffitti wall, a big-size cut-out of Dhanush in his 'Suruli' element has been put up at Dhanush's paternal home-town, Theni.

#JagameThandhiram is releasing tomorrow. But, a First Day First Show without a cut-out ah? How possible it is?!!

No problem, maapla. Dhanush Superfan PP Samy got your back 🙌 pic.twitter.com/J7qtqQqCKr

A fan named PP Samy's cut-out for Dhanush's upcoming release and his orchestration was filmed and released by Netflix India on twitter. Checkout all you need to know about Jagame Thandhiram before its release here.