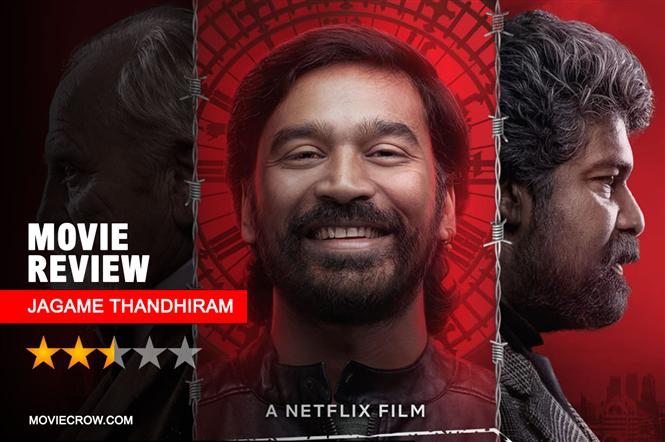 Jagame Thandhiram - This marriage of quirkiness, formula and messaging doesn't really come together!

Karthik Subbaraj's Jagame Thandhiram starts off in his typical style. There is a lot of blood and a lot of quirkiness. The violence is celebrated. And soon this celebration of violence turns into a celebration of Suruli. For well over an hour, Jagame Thandhiram is about Suruli and how he becomes the most sought after henchmen amongst the gangsters in London! The character as such isn't really atypical. The nonchalant, double crossing rowdy playing the hero might have been novel at some point of time in the past. But today, that has sort of become the template to mount a hero vehicle. We then need to wait for the hero's conscience to be awoken which mostly happens at the interval point. So while you stand in queue for your popcorn, the hero transformation would be complete. With OTT, you do not even have that much time to buy into the hero's transformation. It happens simply because it has to happen!

Suruli is a close cousin to Maari and Dhanush has a gala time playing to the gallery. Unfortunately, the present situation would mean that our drawing room is the gallery. The humour works and though we aren't really sucked into the film, the initial half of Jagame Thandhiram is a reasonably entertaining affair. The twists don't really take you by surprise and the film does travel along expected lines but Karthik Subbaraj is in control, well, at least up to a point. It is when the film wants to get serious and speaks about very important issues, that it starts falling apart.

However absurd they might be, overnight hero transformations are still fine in a masala film that knows its stakes. What we have here is a hero who lacks any sort of moral compass. It is just money and a sense of self importance that matters to him. And the topic of refugees is such an important one and to see someone like Suruli getting transformed in a jiffy and then give lectures about refugees, racism and casteism to others is a little problematic to say the least. Well, there certainly is a nice little core at the center about how Suruli who kills migrants in his homeland realizes his folly when he is seen as a migrant elsewhere. But this realization doesn't come through convincingly on screen. All the effort is towards making Suruli look and sound cool. What should have come across as self realization comes across as savior complex. Again, all this would not have mattered in a pretty straightforward masala film or a cool gangster film that Jagame Thandhiram could have been. At one point in the film, Shivadass (Joju George) tells the heroine (Aishwarya Lekshmi) that Suruli is a good guy. And this happens well before Suruli transforms. Well, if being the star of the film is the lone qualification for being a good guy, let us not analyse further. This isn't even convenient writing. You are just labelling a really bad guy as a good one to merely justify the love angle. And just to draw parallels to the backstabbing faced in the real world by refugees, Shivadass calls Suruli a betrayer. The actual scenario in the film is that Suruli works for Peter (an amusing James Cosmo) to spy on Shivadass and when caught red-handed, agrees to take money from Shivadass to betray Peter but then doesn't do it. In fact, the only place in the entire film when Suruli actually does seem to act with some conscience is here when he remains faithful to his 'original' boss.

The film starts like a no brainer entertainer and the biggest conflict at this point is in finding out the difference between 'Thaambathiyam' and 'Thaamboolam'. The quirkiness in these portions almost borders on being spoofy. How else would you explain the need for an IT professional in UK to talk about a gangster from Madurai in his appraisal meeting. I really wished Karthik Subbaraj kept it this way right through. Jagame Thandhiram has its moments. In fact, right through there is something that keeps us invested. Along with Dhanush, cinematographer Shreyaas Krishna and music composer Santosh Narayanan ensure this. But the idea to talk about an extremely important topic in a quirky film that keeps glorifying its hero falls flat!