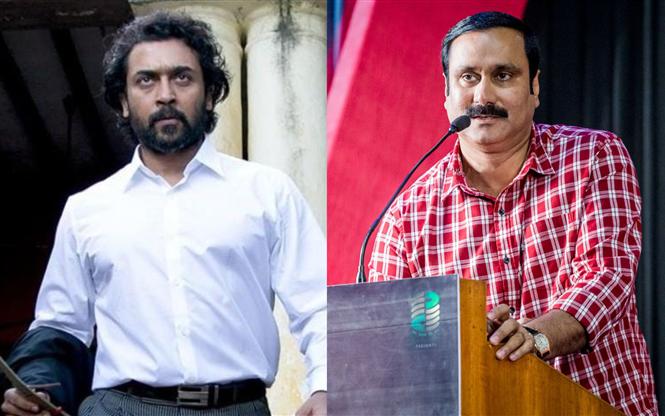 Jai Bhim is based on true incidents that happened in the Vanniyar-dominated Cuddalore district; however the main culprit, a sub-inspector who was responsible for the murder on which the film is based, neither belonged to the said caste nor the Hindu religion. In Jai Bhim, the SI was previously indicated as a Vanniyar via a calendar carrying the logo of Vannia Kula Kshatriya Association. This was later changed to a picture of God Saraswati upon objection.

The SI's name in the film is Gurumoorthy, and he is referred to as Guru during the latter half of the film. Ramadoss objected to the same stating that while most other original names were retained like Rajakannu, Sengeni, Chandru and even constable Veeraswamy, one of the prime accused, the main culprit's name alone was changed from Antonisami and that too to something that is indicative of the Vanniyar community (Late Kaduvetti Guru aka Gurunathan aka Guru was a representative leader of both the Vanniyar sangam and the PMK).

Ramadoss also pointed out factors that did not happen in real life like Ilavarasu's village president character not standing by Sengeni during times of need. Suriya has now responded to the same by stating,

"...A feature film is not a documentary. We have stated in the very beginning of our film (Jai Bhim) that none of the characters, names, incidents indicate anyone in particular.. It is my loving request that the question which has been raised against (abuse of) power through this film, not be confined into 'name politics'...