Jai Bhim controversy gets out of hand! Actor Santhanam gets dragged! 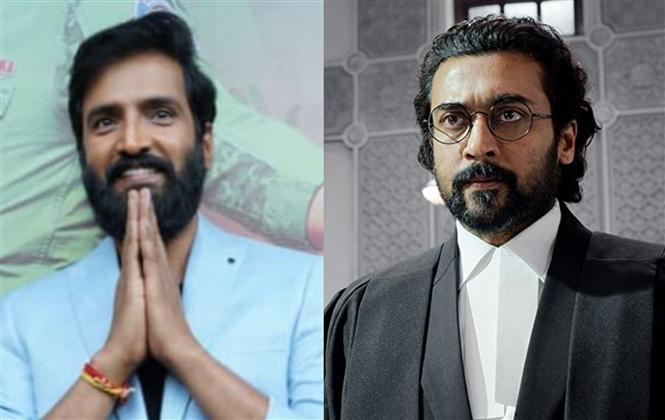 Actor Suriya's house has now received police protection, in lieu of some threats he received in the ongoing caste controversy with respect to his film Jai Bhim. After receiving backlash from Dr Anbumani Ramadoss, chief of the Pattali Makkal Katchi over wrongful depiction of the Vanniyar caste, a legal notice was sent to Suriya and his team by the Vanniyar Sangam.

While online the crusade was divided into #SuriyaAgainstVanniyars and #WeStandWithSuriya, the actor seems to have received physical protection over offline threats. Recently many Kollywood personalities like Tamil Film Active Producers Association (TFAPA) president Bharathi Raja, National award winning director Vetrimaaran among others expressed solidarity with Suriya over the issue.

On the other hand, actor Santhanam during promotions for his upcoming release was questioned about the issue since he belongs to the Vanniyar community. While it was clarified that his statement was the actor's personal perspective and not the makers of the film's which he was there to promote, the actor ended up getting dragged for this:

"No matter what movie it is, it isn't wrong to uplift someone. For example if one is expressing views on Hindus, it isn't wrong to call them great or super. But what is wrong is calling Christians inferior or wrong. But we shouldn't hurt others. Its unnecessary.  At the same time expressing views without watching the whole movie is also wrong. You can criticize a movie and question their flaws and if there are wrongs, they should be corrected.

No matter what kind of people, caste or community is portrayed in a movie, the audience is very clear about their opinion. But yes putting down someone to uplift another could be avoided. The upcoming younger generation should give good movies.

The viewers sit for 2 hours in a theater room forgetting the religious, caste divide and the movie they watch should be a feast towards the same (unity) and that is my intention too."