Sivaranjiniyum Innum Sila Pengalum - A peek into patriarchy through the decades! 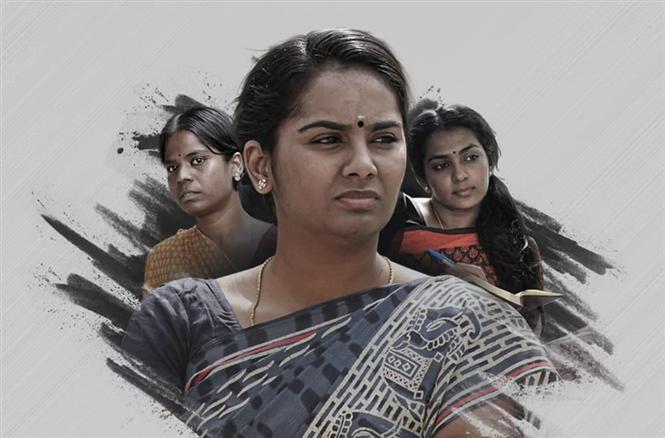 Sivaranjiniyum Innum Sila Pengalum – A peek into patriarchy through the decades!

What is the best way to expose patriarchy to a patriarchal society? Maybe the answer is to have them sit back and showcase a glimpse of their daily routine to them without passing judgements. This is exactly what filmmaker Vasanth S Sai does with Sivaranjiniyum Innum Sila Pengalum, an anthology of three short films based on stories written by writers Jeyamohan, Adhavan and Ashoka Mithran. The three stories are set in three different decades and this works as a commentary in two ways. On the one hand, there is definitely a difference for the better in the way the titular women characters (Saraswathi, Devaki and Sivaranjini) get treated by their family in the three films, as we move from the 80s to the 90s to the 2000s. But on the other hand, we also get to see that how despite the improvement in education and job opportunities for women, patriarchy is able to sustain itself in different forms in our domestic setting.

The first film is set in 1980 and is about Saraswathi (Kalieaswari Srinivasan), who is at the mercy of her husband for almost everything. When we first see the couple, Karunakaran, who plays the husband Chandran, is walking ahead briskly with complete disregard for Saraswathi. She is carrying their baby and is struggling to keep pace with him. We assume that there is some sort of an issue going on between them and the husband is angry. But few more minutes into the film, and we get to know that this is pretty much the routine for both of them. This is a film that deals with physical domestic abuse. Saraswathi just answering back is enough to trigger the ego of Chandran and have him raise his hand. Kalieaswari Srinivasan is terrific as the helpless Saraswathi, who knows that she is being wronged but cannot do anything about it.

The second film is set in 1995 and is about Devaki (Parvathy Thiruvothu), who is a working woman living in a joint family with her husband. Everything seems to be fine at the beginning. The woman is working, she seems to share a cordial relationship with her in laws and more importantly, there seems to be love in the marriage (there is a mini-intimate movement which is the only sign of romance in all the three films together). Most of the film happens from the viewpoint of Devaki’s nephew, a young kid. In a way, this is a film that possibly shows how patriarchy gets ingrained from childhood. What looks like a reasonable and understanding family, turns upside down, the moment they realize that Saraswathi has a personal/private space that she doesn’t want being intruded into. The tension builds up gradually and then Devaki literally burns it all down.

The third (and my favourite) film begins in 2007 and we see Sivaranjini (Lakshmi Priyaa Chandramouli), a sprinter practicing rigorously on a sports field. Then marriage and maternity happen. We now cut to a decade later (references about demonetization register this) and Sivaranjini is still sprinting but now it is at home from the hall to the kitchen and to the room and then back again, and it all seems like a never-ending marathon. Whenever she gets a breathing space, we see her gasping for breath. While on the field, this was caused due to physical exhaustion, what we have now is mental exhaustion. Lakshmi Priyaa Chandramouli is brilliant as someone who had her wings cut off but she cannot complain because that is the norm. She even goes back to her hometown to catch a glimpse of the wings that were clipped, only to realize that they have been long lost. The film ends with a superb stretch that has her sprinting to deliver the lunch box to her kid. And she does get to experience a glimpse from her past as the other kids applaud her.

There is so much in common between the three films and yet so many small differences that capture the milieu, type of people and the time period that the stories are set in. Saraswathi’s home is predominantly darkly lit. The house is in a densely populated place and is always surrounded by people in the neighbourhood, and yet it is always lonely on the inside. Devaki’s home is brighter and is filled with people and this actually results in her longing for a private moment or two. Finally there is Sivaranjini’s house that is a part of a huge apartment complex. This house is again bright on the inside and even has a view of a nearby church tower from the window of the bedroom. The sounds are superbly captured. You get to hear the feeble prayer songs emanating from the distant church and then there is also the Hindu devotional song playing inside the house on TV. While in the first film you got to know a neighbour character, over here, despite being in a populated apartment in the city, we hardly get to see any interaction with the neighbours. The only outside interaction we see is the one that happens in a laundry shop (a lovely touch to have Nadhiye Nadhiye from Vasanth’s Rhythm play on a radio in the shop). In all the three films, the cinematography seems so simple and neat and yet there is so much captured within these small confined spaces. In all the three films (to a lesser extent in Devaki’s case), the leading character is mostly shown at a distance from the others in the house. Both Saraswathi and Sivaranjini are shown in close proximity to the others, only when they are either serving them food or handing over something to them or when they sleep at night. We never see any casual interaction in both the cases. It is almost as if they exist in these two households only to serve. Also the camera never zooms into Devaki's reactions at crucial junctures unlike the other two films. We actually do not get to see much of Parvathy's face emoting. It is as though the camera wants to respect her privacy, something that her husband and family fail to do.

Payasam by Vasanth was the best part for me in Navarasa. Sivaranjiniyum Innum Sila Pengalum is another superlative work from the maker. While I haven’t really watched a lot of Balumahendra’s Kadhai Neram, I do think that Vasanth’s latest works are either in that zone or close to it.