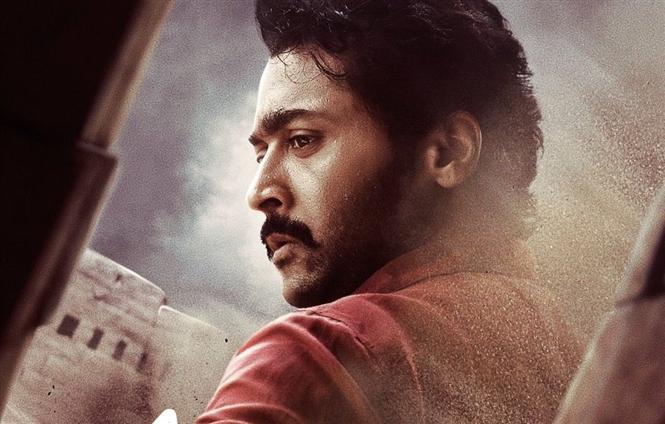 Etharkkum Thuninthavan is an emotional action thriller directed by Pandiraj. The film stars Suriya in the lead role, marking the comeback of the star to the big screens after a couple of direct OTT films. ET has an ensemble star-cast like Priyanka Mohan, Soori, Vinay, Sathyaraj, Saranya Ponvannan, etc playing pivotal roles. Without further delay, let's jump into the review.

Vinay is a big shot and kind of a psychopath with a gang of youngsters who cheat on girls, video them naked with hidden cameras and blackmail them for their pleasure. Suriya, a lawyer who tries to stop these crimes happening around him, unfortunately, one day a woman in his household gets affected by the villain's gang. The conflict peaks and what happens after this forms the remaining story.

Director Pandiraj is of late focusing on rural entertainers with family emotions, with ET, he’s back to the Kathakali zone, trying to mix family emotions alongside a thriller. The first half is passable, packed with romantic scenes and portions of Suriya with his parents which establishes their bonding. With respect to the villain, we don’t get to know a clear picture about the crimes he has committed, we are left just with some assumptions and anticipation that he’ll be focused on the latter. But sadly, the initial parts of the second half zooms again on Suriya’s family, that too with some silly jokes with nothing progressing positively. However the last 40 minutes is brisk with some neatly executed situations, especially the plot point that has the heroine involved drops as an unexpected surprise, the sensitive portion is cleverly written and sensibly handled. On the whole, the screenplay is a mixed bag with a lot of lows and a few highs. The filmmaker’s forte is presenting some quality emotions and comedies that attract the family crowd, here it isn’t badly done but definitely not touching and joyful as his previous two films namely Kadaikutty Singam and Namma Veettu Pillai, maybe it’s because the earlier films focused ultimately on the family backdrop, but here there’s too many things to handle. With a very weakly written villain character, with all stereotypical qualities, the game misses to hold to the necessary extent. The intent of the film is appreciable, taking a subject on women safety, but the packaging is the problem, predominantly because of the messed up scene flow order. Establishing the characters, showcasing their relationships, the jump into the plot, focus on that and reach the peak would have been fitting for the film. But here the order is zig-zag and that spoils the show, at least to an extent. Dialogues aren’t powerful enough to create a solid impact that the subject demands. Seems like time plays a major role in the film as we get to see electronic clock cards in the side in way too many shots, but why, there’s no convincing answer to it. The idea of the climax is amazing and it is sure to click commercially well.

It’s been quite sometime since we saw Suriya in a next-door boy zone, happy that this film has brought back that charm. He fits and does well both in the fun portions and intense situations too. Priyanka Mohan is a pleasant surprise, she is great on-screen and also her character gets a major importance at a crucial stage in the film, she scores with easing grace. Sathyaraj and Saranya together manages to put a smile on the face, but does take part in some boring moments too, on the whole their roles are not that impressive. Soori and Pugazh offer a few laughs, but their screen space is very minimal. There are plenty of supporting characters which aren’t strong as we expect them to be in a Pandiraj flick, he is a master in highlighting even the smallest of artists by giving good roles, it is absent here. So the performances are subdued. Vinay is a miscast and doesn’t gel at all with the story’s backdrop. His performance looks forced and he couldn’t bring a naturally appealing evilness to his character, also his dialogue delivery emotes in the opposite way at times and creates laughter.

The film is filled with experienced technicians and the quality of the output is pleasing too. D.Imman’s songs are suitable for the commercial filling, and there is a variety too. Background score is not as effective as some of his best works, but he has provided what’s required here. Rathnavelu’s camerawork is superlative, the visual clarity is outstanding and he has helped by covering certain scenes with shots from a lot of angles. The colouring is rich, vibrant and dark that perfectly blends for the scene mood. Editor Ruben has tried his best to present the film neatly, it is appealing at places and disturbing at moments too. Stunt choreography by the famous Ram-Lakshmanan duo is enjoyable, the couple of fight sequences are convincingly done, but their style gets very repetitive after a point. VFX work is sloppy, some of the green mat shots look very fake.

Etharkkum Thuninthavan has its engaging moments, but there’s an equal amount of weak elements too. With a strong subject in hand, what could have been an enjoyable family entertainer with thrills is drained down to a mixed bag due to its mediocre packaging.

ET - Not Sharp As Expected, But Not Blunt Too!