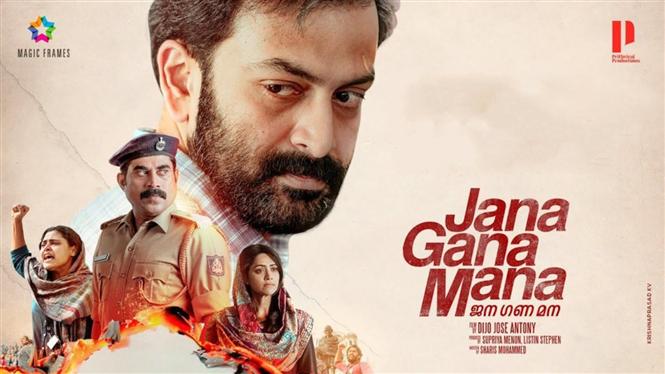 Jana Gana Mana is a social crime thriller starring the lovely Driving License duo Prithviraj Sukumaran and Suraj Venjaramoodu in the lead roles. The film is directed by Dijo Jose Antony, whose previous and debut film was Queen [2018].

Mamta Mohandas, is a college professor who is very attached with the students of the campus. Unfortunately, she is found dead and the reports say that she has been raped. Students go on a strike for justice and it becomes a National headline. Suraj Venjaramoodu is the ACP who takes charge as investigative officer to this burning case. Prithviraj Sukumaran plays the role of a lawyer.

The entire first half takes a sweet time to set the mood of the film and establish the story at an unhurried pace. The investigative plot points in the initial portions are middling that felt as a disadvantage while watching, but there is a purpose behind it which is revealed in the later half of the film. The engagement is a bit on and off till the break-out, but the parts that are on the bright side are too good. Also, taking a deeper look at the flow, certain angles are kind of predictable even before they are conveyed to the audience, so there’s no big shock value in the proceedings. Prithviraj is introduced at the interval point and the whole second half flies high. His opening arguments in the court are so unique and fresh, deserves a big round of applause as each and every statement he submits is like fire, instantly relatable and thought-provoking at the same time. The courtroom drama takes the story forward and we get to witness a neatly written script that’s narrated in a fascinating way. The character placements, logical reasoning at most places are perfectly etched to deliver a striking cinematic experience. Not all the angles of the subject are convincing as in a major situation where one of the central characters all of a sudden voluntarily initiates a master plan isn’t justified well. Second half is superb and it hides the flaws that exist in the early stages of the movie, and ends with a bang too.

Though there is no scope in the story to provide a goosebumps face-off sequence between Prithviraj and Suraj like in Driving License, both have been given equally important roles and both have done their best. Apart from them, Mamta Mohandas plays a major role as the story revolves around her death, her characterization is good and motivating, she impresses in the flashback portions. Kudos to the casting choices, meticulously done and thus even the smallest of roles get a fine portrayal on screen. Plenty of experienced artists have come together to bless and give a soul to the characters written. Sridivya who plays Prithviraj’s wife hardly appears for five shots and no clue why she was cast.

A couple of emotional songs are touching as the tunes are impressive. Background score is a mixed bag, some portions are okay but many scores resemble the music of some other language films like Tenet, etc. Camera work is neat, night shots have been captured with a good amount of frame depth and detailing. Editing helps the narrative at a lot of places, despite the story going back and forth at a bunch of places, the presentation is crystal clear mainly because of the editor’s contribution.

Though the first half clearly registers the subject and the characters involved that sets up the stage for a courtroom drama, it wasn’t tight in terms of engagement. But an engrossing second half with very minimal complaints overshadow the flaws and the end product is largely satisfying. 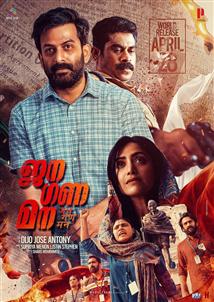