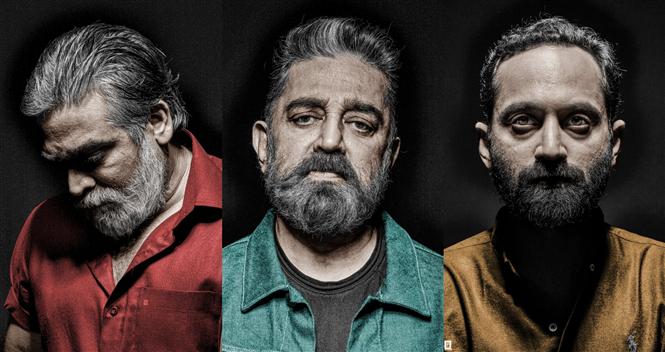 Vikram directed by Lokesh Kanagaraj is an upcoming Tamil movie starring Kamal Haasan, Vijay Sethupathi, Fahadh Faasil among others. The action thriller is scheduled to hit theater screens on June 3, 2022 and the movie's runtime was recently revealed to be 173 minutes i.e. 2 hours 53 minutes.

Buzz also has it that Vikram has cleared censor with an U/A though an official announcement on the same remains. The movie which is produced by Raaj Kamal Films International, will be releasing in Tamil, Telugu, Malayalam, Kannada and Hindi languages and its story revolves around the search of the protagonist (more here).

Also starring Narain, Chemban Vinod Jose, Gayathrie, actor Suriya (cameo) among others, Vikram has Anirudh for music, Girish Gangadharan for cinematography, Philomin Raj for edits and Anbariv for the stunts. The USA premiere of the movie is expected to be its first show, and it begins at 6:30 PM EST i.e. 4 AM IST.