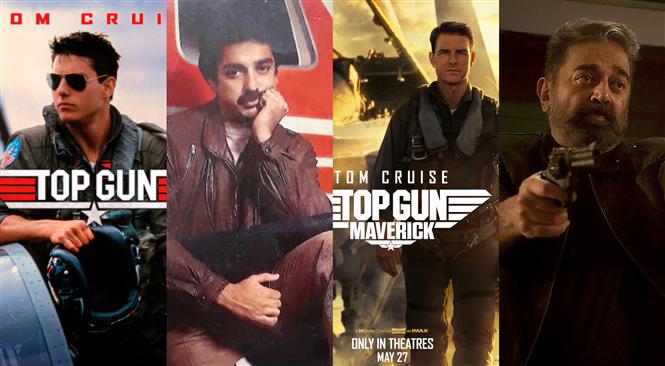 In 1986, Tom Cruise who was in his early 20s played the iconic Pete 'Maverick' Mitchell, a rebellious young Navy pilot whose was characterized by his need for speed, his aviators and his Kawasaki bike. The movie he played it in was titled Top Gun [available to stream on Amazon Prime Video] and it released in theaters in May 1986 [Premiered on May 12 and released on May 16].

36 years later Tom Cruise has come up with a sequel for Top Gun titled Top Gun: Maverick and it releases in theaters in India on May 27, 2022.

Coincidentally, Kamal Haasan's upcoming Tamil movie Vikram which is scheduled to hit theater screens on June 3, 2022 is also a sequel to his own 1986 classic hit of the same. Additionally, the 1986 Vikram had also released in the month of May that year [May 29, 1986] and its sequel, albeit spiritual is coming out three and a half decades later as well.

The only difference is that while 1986 Vikram released 2 weeks later than  Top Gun, the 2022 Vikram [trailer here] is releasing just a week following Top Gun: Maverick.