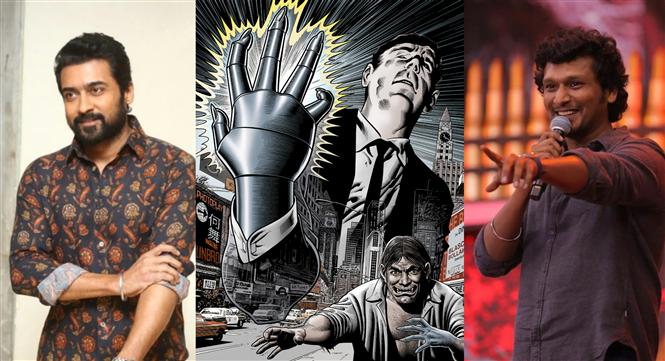 9 months since we reported about the possibility of Irumbu Kai Mayavi being rekindered again, director Lokesh Kanagaraj has finally opened up on what is the status of this ambitious Suriya movie. Talking to Cinema Vikatan in a video interview, Lokesh who is currently awaiting the release of Vikram said that the sole reason why Irumbu Kai Mayavi never went on floors was him. Apparently Lokesh was just a film old when he started working on the script of this super-hero subject, which is touted to be inspired from the comic/movie  The Steel Claw.

Lokesh revealed that after working on the script for 8 months, he opted out of the project on his own will as he didn't have the confidence back then to handle such a huge project. Lokesh also said that to this date, producer SR Prabhu of Dream Warrior Pictures, who gave Lokesh his big break still has high hopes for Irumbu Kai Mayavi.

The director concluded by stating that he will soon be doing Irumbu Kai Mayavi with Suriya. It is worth mentioning here that the super-hero subject deals with the protagonist loosing one of his hands in an accident and fighting crimes with a metal hand [hence the title Iron-handed magic man]. Many believe this has been foreshadowed in Lokesh's June 3 release Vikram, which has Suriya in a cameo role, though this theory has been debunked .