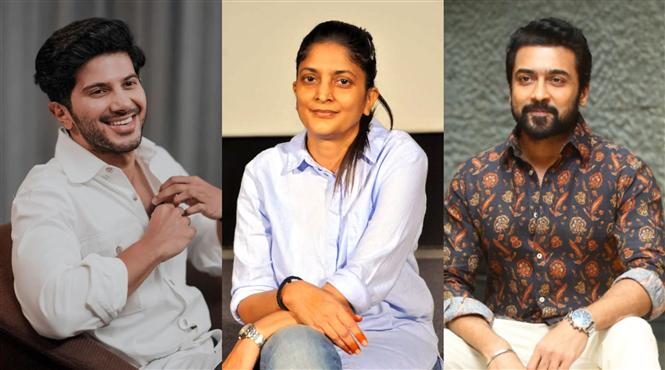 Earlier this year actor Suriya confirmed to Variety that he will be teaming up with director Sudha Kongara for a film which will begin post his current line-up of the untitled Bala film, Vaadivaasal with Vetrimaaran and a movie with Studio Green production banner, to be directed by Siva.

Sudha Kongara is currently gearing up to begin her next with KGF producers Hombale Films. At this time, it has been revealed that Dulquer Salmaan will be part of Sudha's film with Suriya. While Suriya's equation with the director needs no introduction, Dulquer Salmaan was declared by the filmmaker as 'her favourite Malayalam actor' 2 years ago.

Happened to watch “Thangam” from #PaavaKadhaigal ! Sudha Maam you’ve touched and moved the viewers once again with such a delicate and tender story. @kalidas700 your portrayal was endearing, fragile and heartbreaking. @imKBRshanthnu you were mature strong and intense. 🤗👏🏻👏🏻 pic.twitter.com/mAX0FchrMc

Back then Dulquer had also cheered on Sudha Kongara by giving a twitter shout-out to her then release Thangam, which was part of the Tamil anthology Paava Kadhaigal.