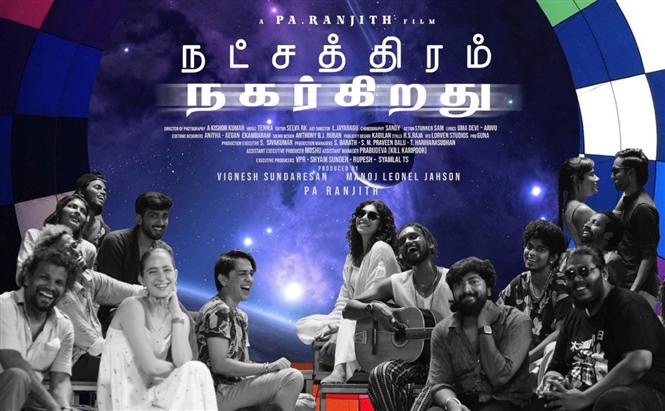 atchathiram Nagargiradhu is a romantic drama directed by the sensational filmmaker Pa.Ranjith. The film stars Kalaiyarasan, Kalidas Jayaraman and Dushara Vijayan in the lead roles.

The film is about a bunch of ambitious theatre artists coming together for a stage-drama on love. In the process, they discuss the various forms of politics surrounding it and in the process, they evolve and get to know what love is.

We’ve seen many movies intended to follow political correctness, also achieve the same in some plot angles but leave the rest in the air. This is not one such insensitive film, director Pa.Ranjith has approached it with utmost responsibility. He has locked the canvas beautifully, the intense opening scene between a couple establishes how important the drama is going to be and the Rangarattinam song sets up the vibe of the film. The initial scene where the entire cast talks about love, is capable of creating a public discussion. Likewise, there are many memorable clap-worthy sequences that speak of values . Plenty of other conversation portions are so life-like and somehow connect strongly with the viewers. There are a truckload of lively moments that turn instantly laughable and work out great in a theatre atmosphere. At the same time the visual representations, aesthetic sense and metaphor placements of the director are truly fascinating. Lovely scene compositions and shot divisions by the master craftsman, giving scope in some way or the other for a group of artists in every single scene is more or less an impossible job, but it’s been done remarkably and the fact is sure to glue the audience to their seats. Many characters are wonderfully etched, naturally evolve and are so relatable… the fact that a new person can easily be inspiring and influencing to the other is perfectly exhibited. Dialogues are bang-on-the-face, very powerful and boldly conveyed, that includes some burning topics too. Undoubtedly, the film manages to engage despite its lengthy runtime, but there are dips at places which make us feel the duration as a bit of a bother. There is a big issue at times, it tries to incorporate way too many stuff and serve them all at once, so certain spots appear very preachy like a dialogue-heavy message movie. The long-drawn-out yet terrific village portion didn’t have a solid purpose to exist as it hardly made any changes to the core content. Also, suddenly there were victims narrating their stories facing the camera, an unwanted segment which seemed to be like a documentary. Similar to the casteist contract killer in the film Periyerum Perumal, there’s a weirdo here, but unfortunately he’s introduced only like 30 minutes before the ending, so he makes absolutely no impact. The climax could have been much better and different, the decision to end the film in such a way questions how the subject was intended to be dealt after a major plot point took place in the middle of the flick. Instead they could have shown some nice closures of all the characters involved.

Awesome performances in and out. None of them seemed like they were acting in front of the camera, all the artists were very living in their roles. To be precise, I loved Kalaiyarasan the most, both in terms of characterization and presence. Dushara Vijayan delivers a courageous performance and she left a solid impact even after the movie is over, she did her empowering character with ease. Kalidas Jayaraman was moody almost for the entire film, he shows variety and such a measured acting by the champ. The supporting characters have big involvement and they’ve contributed their fullest. Two among them especially grabbed a huge round of applause for their funky attitude. But must mention that the artist who played Kalaiyarasan’s mother stole the show with her versatile act with a minimal screen time, what a precious find she is. The actor who played the likeable Dancing Rose in the movie Sarpatta Parambarai creates some tension here with his menacing looks and body language.

Tenma’s music here creates some admirable attraction towards the film. Three songs stand out, others are also decent. He hits a century with background score, produces immense value to the situations, his work is nowhere overpowering yet strikes the right chord. Phenomenal achievement by the cameraman, refreshing craft and stellar frames from start to finish. Cinematographer Kishor Kumar has leveled up the vision of the director to several notches higher, great colour sense too. Hats off to the art department, they’ve carefully treated the frames with metaphorical wall drawings and they are catchy enough. Props are arranged so realistically, the opening scene is the best example for that. Seamless editing, scene transitions are neatly done, however I wish the length could have been cut down at least by 20 minutes by scissoring a couple of unwanted tracks.

Preachy at places as it tries to cover too many angles of the ‘Love is Political’ topic. Nevertheless the stunning visual storytelling, complicated yet relatable characters, incorporating loads of cheerful conversations, etc make it one of Pa.Ranjith’s best works in his filmography. 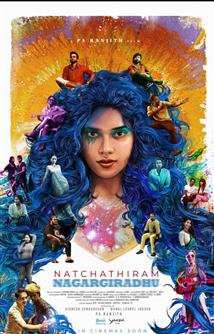