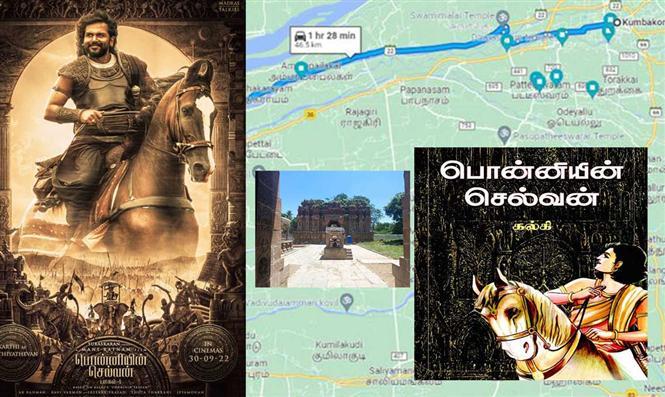 Ponniyin Selvan is an upcoming period drama based on Kalki Krishnamurthy's novel of the same name. Part 1 of this Mani Ratnam directed movie is nearing release [September 30] and all things Ponniyin Selvan are currently in the trend. Besides Ponniyin Selvan's background and characters, its geographical locations hold prominence in the story and recently a twitter user @Thamizhlab decoded the accuracies of it with interesting facts, google map links and images.

#PonniyinSelvan novel is famous for its characters, history and plot twists. Did you know that its geographical descriptions are accurate?

Come, let us travel along Vandhiyathevan to retrace the hero's journey in modern day Tamilnadu, with google map links and images! (A thread) pic.twitter.com/fnwfGRQWk9

#PonniyinSelvan novel is famous for its characters, history and plot twists. Did you know that its geographical descriptions are accurate? Come, let us travel along Vandhiyathevan to retrace the hero's journey in modern day Tamilnadu, with google map links and images! (A thread)

Vandhiyathevan is on a mission - to deliver two secret messages from Kanchipuram to Thanjavur. After 175km of travel, both the hero and his horse are tired. That is when he sees the refreshing visuals of Veeranarayanapura lake. It was Aadi 18, and the Cholas were celebrating. 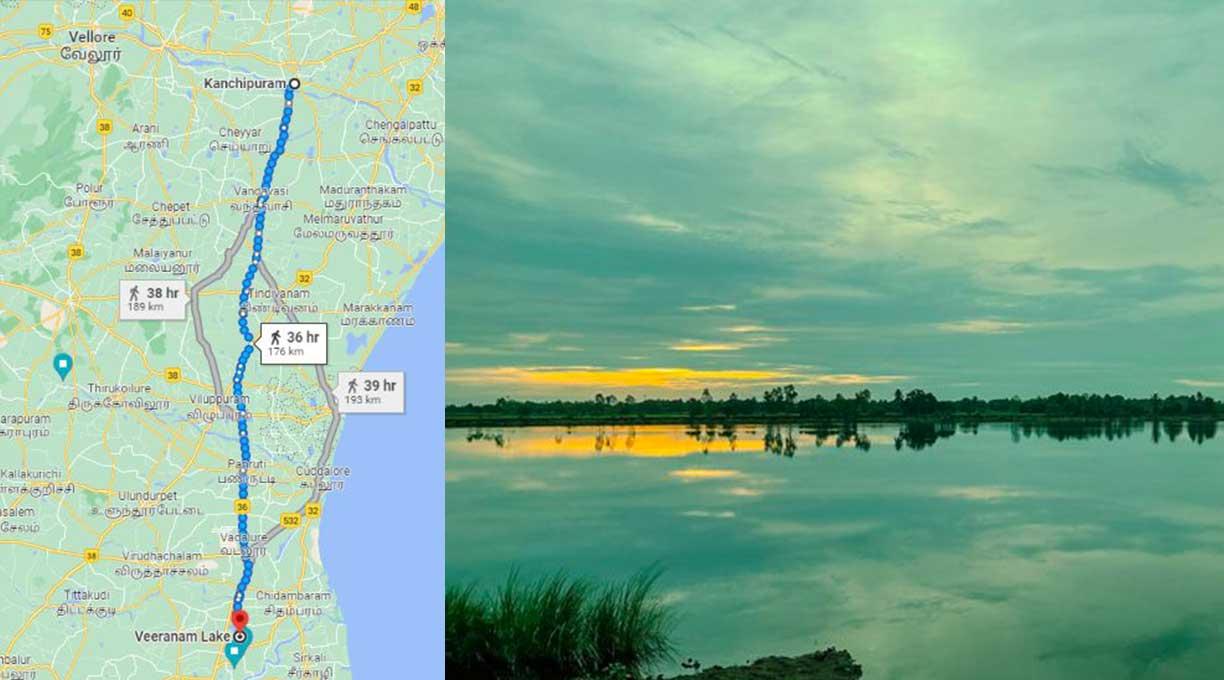 This dam of 16km length was built by Rajaditya Chola who named it after his father Parantaka-1 aka Veeranarayanan. Ramanuja was influenced by the magnitude of this lake and decided to establish 74 mutts : a number based on the 74 openings in the lake. Map:  Map Link 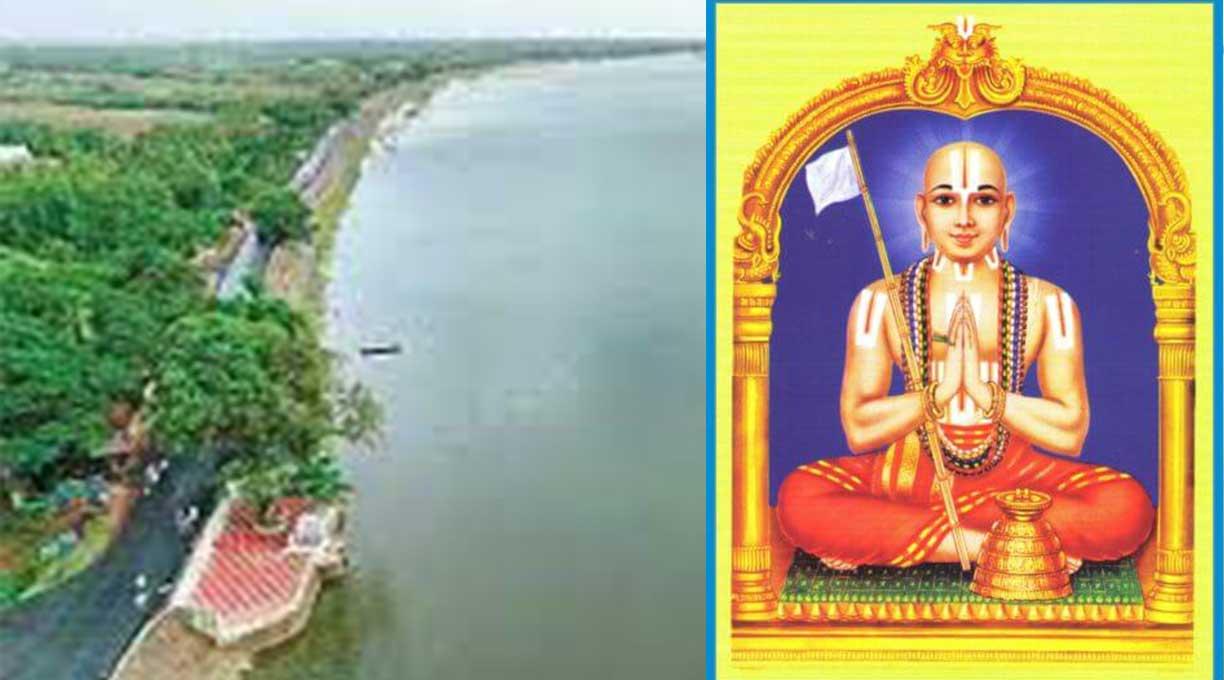 Hero & Aazhvarkadiyaan proceed south to Veeranarayana Perumal temple. They see a young Nathamuni, singing the 10 known pasurams of the time (who later goes on to discover the lost 3990 pasurams) This is Kalki's genius: making his reel characters meet real historic people! 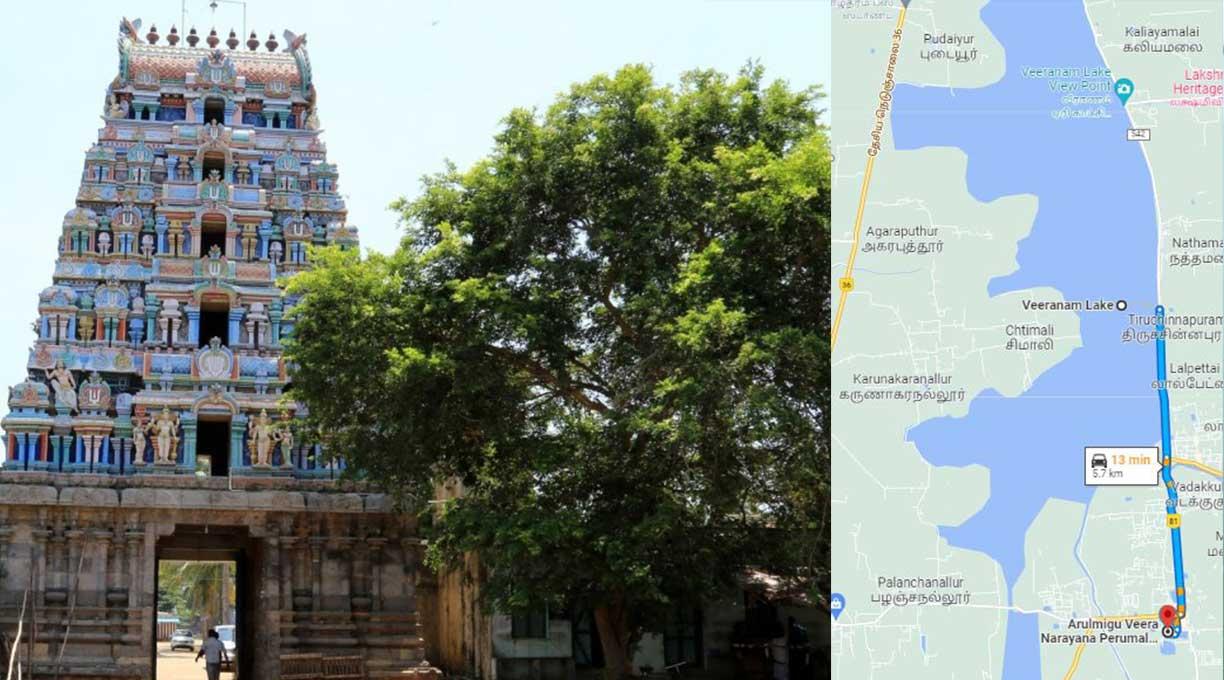 This Abimaana Sthala temple is in Kattumannarkoil, which is 26km from Chidambaram and 6km from Veeranam lake. Chola inscriptions mention the temple's name as Veeranarayana Vinnagaram (Tamil for Vishnu's Griham-house) Map: Map Link

Next, the hero reaches Kadambur Sambuvarayar palace before sunset to stay the night. This is where the plot thickens: he accidentally discovers a secret meeting of conspirators discussing who should become the next king! But where is this Sambuvarayar palace today? Does it exist?

Palaces, however magnificent, if built with red stones do not stand the test of time. They crumble eventually, unlike temples built with black stone. Bloggers suggest that Amirthakateshwarar temple in Melakadambur, is the site of Kadambur palace. Map: Map Link 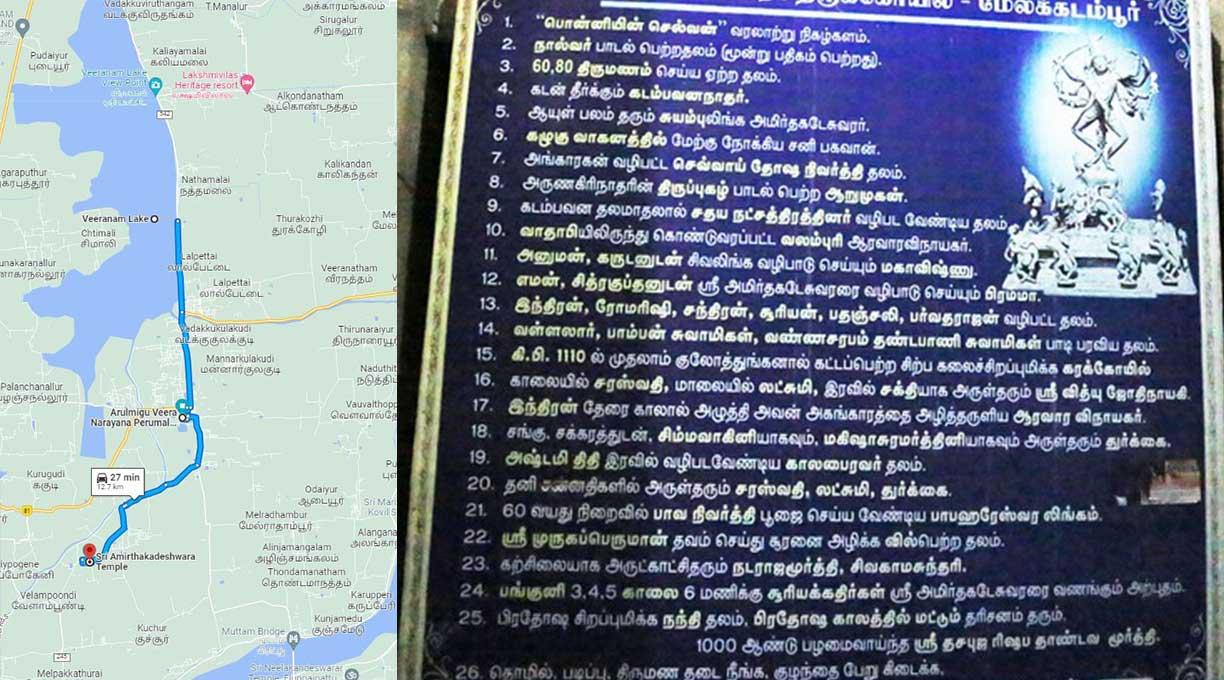 The next morning, influenced by Aazhvarkadiyaan, the hero crosses Kollidam river with a boat that is big enough to hold his horse, and travels south to see Kudanthai astrologer. This is where he meets his love interest, Kundhavai for the first time. Map: Map Link

Let us take a slight detour - and travel along with Aazhvarkadiyaan. He crosses Kollidam river with the hero & then splits up to follow Pandya conspirator Idumbankaari, who meets his leader Ravidasan at Thirupurambiyam Pallipadai at midnight. This secret place exists even today!

This Pallipadai temple was built to honor king Prithvipathi, who died in the Thirupurambiyam battle. This battle changed the course of history, resulting in the fall of Pallavas & the rise of Cholas. Today, it is is in ruins, with no walls or visitors! Map : Map Link 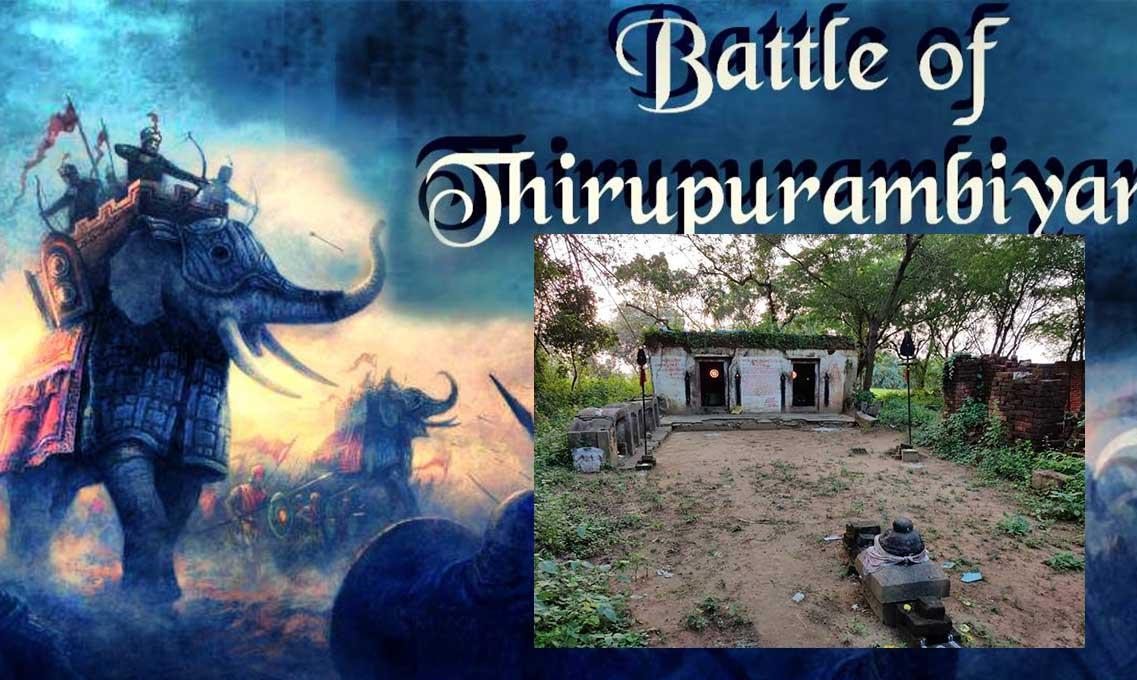 The hero, from Kudanthai reaches Thiruvaiyaru & then proceeds to the new capital: Thanjavur to deliver his 1st message. In this Rajapattai (Highway), he meets Nandini for the first time. She is in a royal palanquin, and sweeps the hero off his horse, when she reveals herself! 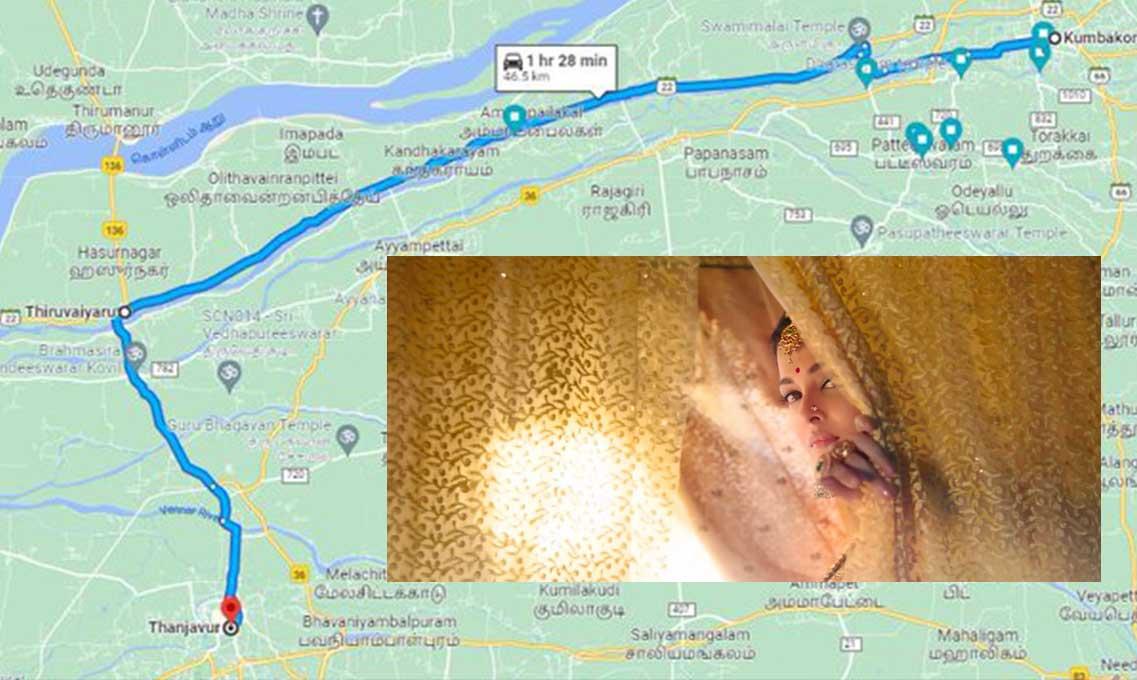 After multiple adventures in the Tanjore palace (the site of which is unknown), he reaches Pazhaiyaarai - the old capital of Cholas. To deliver the 2nd message to Kundavai. Nathan Koil and Vadathalli Koil at Pazhaiyaarai are mentioned in the novel. Map: Link

Multiple magnificent palaces at Pazhayaraai - one each for the king, queen & princess are nowhere to be found today. Their remains are in a village called Chozhanmaaligai. The Cholas, their palaces didn't last, but their temples and fame sure did! Map: Link

Finally, Kundhavai & the hero meet, in a boat near Pazhaiyaarai lake and he delivers the 2nd message to complete his mission. But wait - the princess sends him off on his next mission - to Sri Lanka, to bring Ponniyin Selvan back to the Chola kingdom! 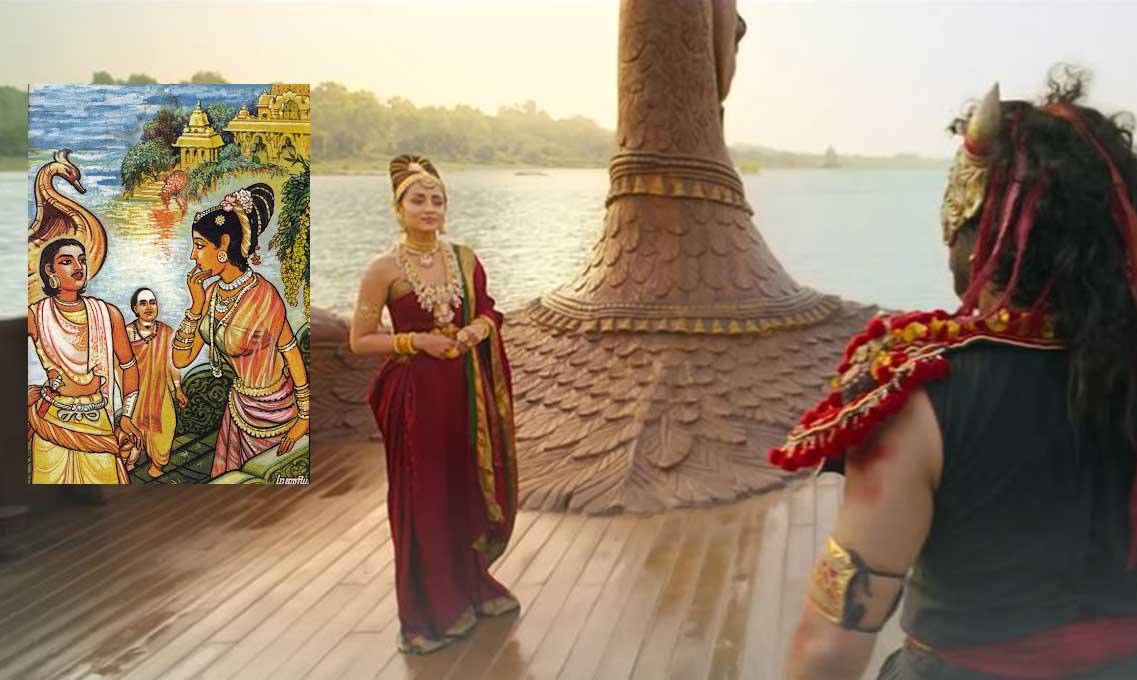 Phew, The hero's journey from Part 1 of the novel comes to an end here. He travels a grand total of 350km from Kanchipuram to Pazhaiyaarai with multiple detours, betrayals, friendships and loves! And Kalki made us travel along with him, through #PonniyinSelvan1