As reported by MovieCrow before, it was officially announced today that Gold starring Prithviraj Sukumaran and Nayanthara in the lead will release in theaters on December 1, 2022 [Thursday]. Along with this, MovieCrow hears that the makers are planning on releasing Gold on OTT within a few days of theatrical run; The movie will be available for streaming on Amazon Prime Video (official) on December 30, 2022 [Friday].

Gold directed by Alphonse Puthren of Neram, Premam fame is a movie about incidents that unravel after a mobile shop owner named 'Danger' Joshi (Prithviraj Sukumaran) purchases a new car for prospective marriage alliance. The entire story takes place within 4 days of his purchase and Nayanthara plays a character named Sumangali Unnikrishnan in it.

While the Malayalam satellite rights of Gold is with Surya TV (official), its Tamil rights are said to be with Sun TV.  Gold is produced by Prithviraj Productions and Magic Frames. 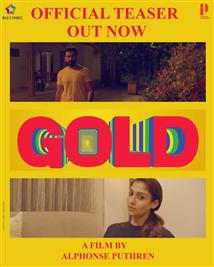