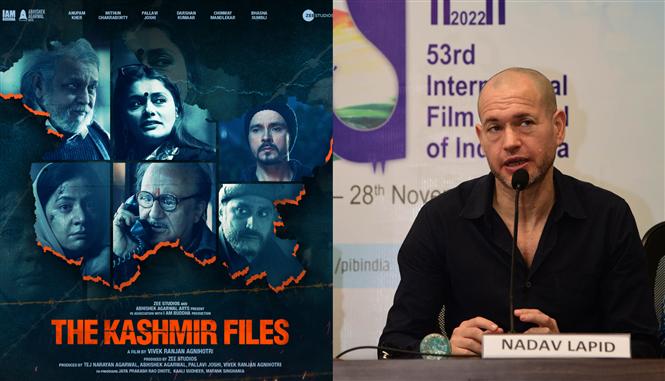 The International Film Festival of India (IFFI) which is an annually held event at Goa recently concluded its 53rd edition with an unexpected bang. The festival in 2022 took place between November 20 to November 28 and on Monday night, Israeli filmmaker and famed screenwriter Nadav Lapid, who headed the IFFI jury, took everyone by shock with his open bashing of The Kashmir Files Hindi movie.

"15 films in the international competition, the front window of the festival (IFFI). 14 out of them had the cinematic qualities and defaults and evoked vivid discussions. We were, all of us disturbed and shocked by the 15th film, by the movie The Kashmir Files. That felt to us like a propaganda, vulgar movie, inappropriate for an artistic competitive section of such a prestigious film festival. I feel totally comfortable to share openly these feelings here with you in stage, since the spirit that we felt in the festival can truly also accept a critical discussion, which is essential for art and for life. Thanks a lot" (sic).

The Kashmir Files directed by Vivek Agnihotri revolves around the killing and exodus of Kashmiri Pandits from the Kashmir Valley in 1990. It has been mired in controversy since its release in March 2022, with many Indians alleging 'loose facts' and 'hate-mongering', especially with the Hindu-Muslim tension under BJP-ruled India and the political climate* in the Indian state of Kashmir.

*Jammu and Kashmir (J&K) went from a single state to two Union territories in August, 2019 and hours before the official announcement, the BJP-ruled center infamously cut off internet from the entire region for 1.5 years. They had also cut off landline phone services and mobile phone services, which were restored a month and 2 months (only postpaid) later respectively.

Nadav Lapid, who is of the Jewish descent is known for portraying both the good and bad of the Jews. As much as he addresses antisemitism in his movies, he has also been critical of Israel’s militarism and curtailment of freedoms. So his statement against a controversial movie comes as no surprise. Another no-surprise element was the strong reactions from Indians, who equated Lapid's comment on The Kashmir Files to him denying the occurrence of the real life tragic event.

Naor Gilon, Israel's ambassador to India harshly condemned Lapid and distanced Israel as a country from the filmmaker's independent views. Anupam Kher who starred in The Kashmir Files held a press conference with Gilon and called Nadav 'vulgar', 'opportunist' and 'insensitive towards the suffering of Kashmiri Pandits'. Pallavi Joshi, wife of The Kashmir Files' director, and also an actor of the film hit back at Nadav calling him a 'holocaust denier'.

An open letter to #NadavLapid following his criticism of #KashmirFiles. It’s not in Hebrew because I wanted our Indian brothers and sisters to be able to understand. It is also relatively long so I’ll give you the bottom line first. YOU SHOULD BE ASHAMED. Here’s why: pic.twitter.com/8YpSQGMXIR

"If you are a jury member you cannot use words like vulgar or propaganda. I think it is a vulgar remark by that person (Nadav Lapid), who himself is vulgar and opportunist. A reliable source informed me that he was missing from his room throughout the night. This was not the statement he was to give at the closing ceremony of the film festival. What he said was entirely different. This is pre-planned as immediately after his remarks the toolkit gang became active on social media..To use the platform of IFFI for your own agenda is not only unfortunate, it's disgusting," - Anupam Kher in a press meet.