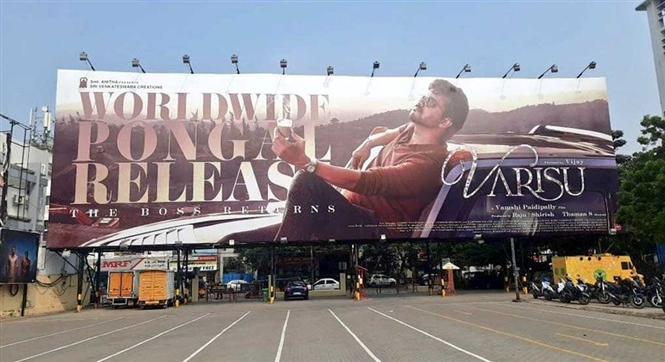 Among the direct Tamil releases, Ajith starrer Thunivu and Vijay starrer Varisu are the movies competing in the Pongal race in January, 2023. While Thunivu releases January 11, Varisu will be hitting theater screens a day later i.e. January 12, 2023. However 7 Screen Studio, distributor of Varisu in Tamil Nadu have beat the other movies to capture the most prominent king size banner at Sathyam Cinemas in Chennai.

Sathyam Cinemas is a hot-spot for cinephiles in the captial city of Tamil Nadu and the makers are estimated to have spent Rs. 9 lakh on this single hoarding alone, for it to be there till January 12.

It is also heard the 7 Screen Studio is keen on securing other prominent hoarding locations in Chennai and are fast closing on the same. Varisu, titled Vaarasudu in Telugu and Vaaris in Hindi, is a production venture of Dil Raju's Sri Venkateswara Creations and is directed by Tollywood's Vamshi Paidipally. Rashmika Mandanna plays female lead in this movie, which comes with an ensemble of senior actors and has S Thaman for music.