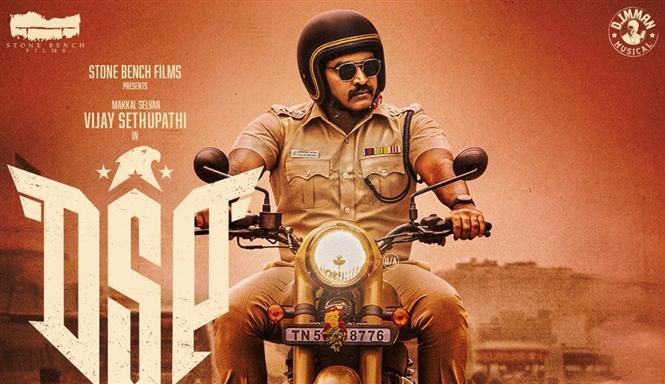 DSP stars Vijay Sethupathi in the lead role as a Police officer. The movie is directed by Ponram and music is scored by D. Imman.

Vijay Sethupathi is looking for a simple Government job as per his father’s wish. A series of incidents get him into trouble and he decides to become a cop to protect himself. How he deals with the villain and saves the day forms the remaining story.

A rooted cop masala flick, which gets the base right. The early sequences seem to be all-over-the-place, but it is somewhat justified when the reasoning and the conflict is fully established before the interval block. A couple of incidents that set the path for the cat and mouse game is shown in a detailed manner. The first hour occupies more time on needless commercial elements by mixing usual love scenes, a flat comedy track by Pugazh and irrelevant song placements with a very small portion that connects the core story. Even the second half fails to focus on the main subject, a lot of space is given to establish the Police officers who work alongside the hero who don’t contribute enough to the drama in the later stage. There are songs again to disturb the flow, also has an atrocious extended cameo by Vemal that fills a few scenes. Screenplay has very minimal face-off scenes and they lack the punch as well. Plenty of continuity issues and dialogues are out of sync at many places.

Vijay Sethupathi though doesn’t elevate heroism by contributing anything special, he has done what is required for the movie, a measured act. Debut heroine Anukreethy Vas looks apt for a girl-next-door role, but her screen presence could have been neater, however she gets a usual mindless character to play. A few supporting characters in the hero’s family had scope to become big, no complaints with their performances, but their characters and the drama around them could have been utilized well for them to create an impact. Villain gives the menacing feel with his physique and rugged look, commendable acting too, but his character could have been designed in a more powerful manner.

D.Imman’s songs are a disappointment, considering the director and musician’s previous combination films, this is nowhere near. Background score is a mixed bag, mass moments carry a decent enough re-recording, but the dramatic portions are missing something. Neat camera work that doesn’t harm the visuals, predictable angles yet not disturbing. Editor could have concentrated on trimming and reducing the runtime, length is very much felt and I wish the distraction situations were chopped off. Tacky work by the visual effects team, green mat sequences are evident and look patchy on the big screen.

A simple Police subject that holds a convincing backstory, has the potential to become a solid commercial flick, but settles on the ground level due to uninteresting situations and a screenplay with way too many deviations.