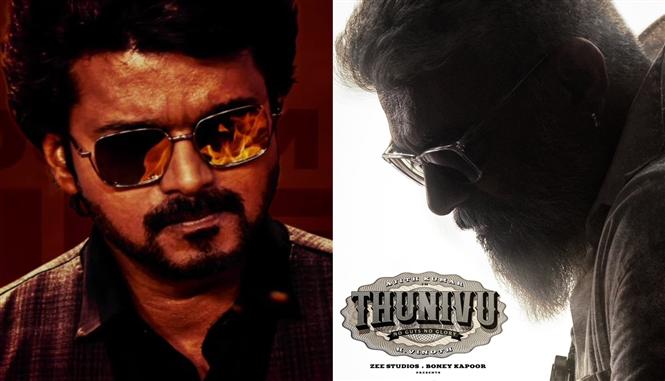 Vijay starrer action entertainer Varisu and Ajith starrer action thriller Thunivu are gearing up for a big Pongal clash in January 2023. While official announcements on the release dates await, it is expected that Thunivu and Varisu will hit theater screens a day apart i.e. on January 11/12 and January 12/ 13 respectively, or on the same day i.e. January 12, 2022.

With expectations surrounding the Ajith and Vijay movie on an all-time high, curiousity lingers about what the actors themselves feel about the impending box-office competition. In a print interview with the Tamil magazine Kumudham, Thunivu director H. Vinoth has revealed that, contrary to what many believe, actor Ajith did not push for a Pongal release for Thunivu.

The filmmaker said that they wanted a festival release for the movie and hence had planned for a Diwali 2022 release. But the film wasn't completed by then, so Ajith gave them December 14 as a potential release date, since it marked the anniversary of his blockbuster movie Billa.

However Thunivu wasn't completed then either so the makers opted for the next big holiday which was Pongal. Actor Vijay's response on the other hand, was revealed via an interview by actor Shaam who plays Vijay's brother in Varisu/Vaarasudu. Sharing his conversation with Vijay about the Pongal clash, Shaam said,

“As soon as I learned about Thunivu’s release date, I phoned Vijay brother and informed him about it. Vijay said  'it’s a good thing no? He (Ajith) is also my friend. Both films will do well. It would be such a celebration'..”

Interestingly, a Pongal holiday clash for Ajith and Vijay movies is happening for the 7th time; the last time Ajith and Vijay films released during the Tamil festival was in 2014.