Debutant Balaji K Kumar’s Vidiyum Munn is a taut thriller that stands out distinctively from the crowd with it's theme and presentation. It is heartening to see a film that stands on the merits of it's narration without bowing down to commercial compulsions.

In an eventful night a lady of the evening (Pooja) and a kid (Malavika Manikuttan) are on the run. They are chased by three different groups. Why are they on the run? Do they get caught? Who catches them? All these questions are answered in a climax that is a clincher.

This is a film where you cannot single out a particular actor for praise.Even if someone is just crossing the frame he or she makes an impression and looks the part of the character he or she plays. It would be unfair even to miss out mentioning someone while appreciating the others.

Cinematographer Sivakumar Vijayan takes us through the dark lanes of the city in the night which make for compelling viewing. There are movies where the camera angles will stand out yearning for attention and then there are films where the lensman will remain in the background and let the narration take center stage. Vidiyum Munn is that rare breed which almost perfectly balances these two. While you cannot take your eyes off some innovative angles and picturisation it is also done subtly without taking your focus off the narration. The soundtrack of Girish Gopalakrishnan keeps you engrossed. The narrative keeps switching back and forth. It also keeps switching from the perspective of whom it is being told. But it all blends seamlessly thanks to editor Sathyaraj.

The debutant director deserves praise for so many things. The film is set in a grim environment but the mood is never brooding. In a tale that deals with pimps and prostitutes there is not a single shot of navel or cleavage. The violence is gory but blood is almost never shown. Though the narration is realistic the presentation is stylish. There is not any negative as such to speak of in the film. Certain portions might be unsettling for some people and the second half stretches just a little compared to the crisp first half. The only request to filmmakers is, if and when they get inspired or decide to adapt a foreign film it would be nice if they credit the original.

Vidiyum Munn is brilliant cinema that makes for compelling viewing. A definite must watch. 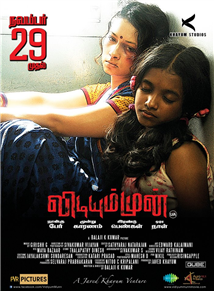