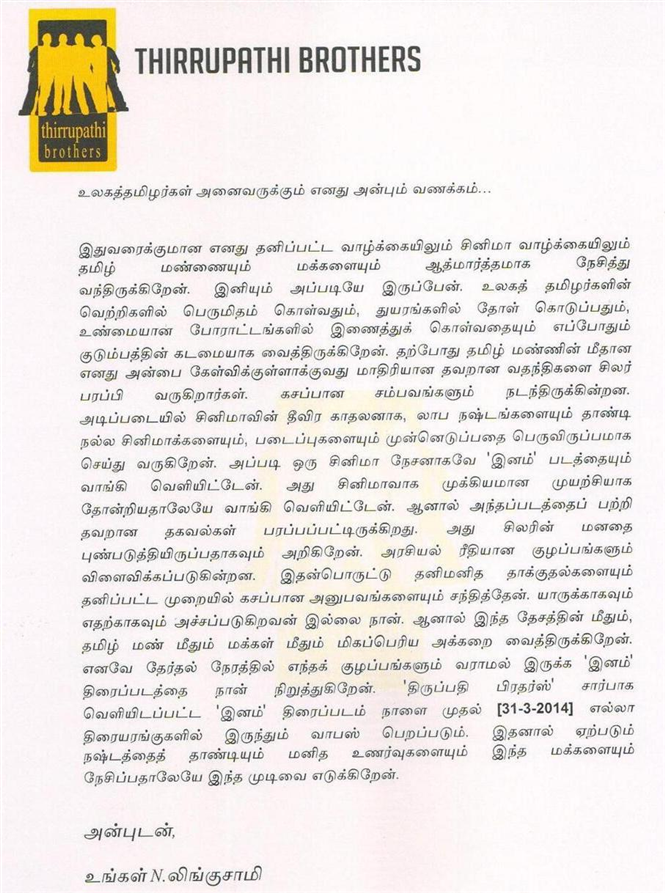 Inam directed by ace cinematographer Santosh Sivan hit the screens on March 28. The film has been getting raving reviews from audience and critics alike. The story revolves around a group of teenagers in an orphanage set during the civil war in Sri Lanka.

The makers had removed five scenes from "Inam" on Saturday, following the request by some Tamil fringe groups. The screening of Inam will now be stopped all over Tamil Nadu from today (March 31) following protest from Tamil fringe groups. Inam produced by Santosh Sivan was released by Lingusamy's Thirrupathi Brothers. The production house has issued an official press release stating that Inam will be pulled out of theatres from today.

In the statement, Lingusamy had said, "My love for Tamils has been questioned by some groups. I distributed 'Inam' as a cinema lover and not to hurt the sentiments of my Tamil brothers and make profits. To avoid confusion during election time, we are pulling out 'Inam' from cinemas tomorrow (March 31)"

"I'm not afraid of any opposition but I'm concerned about the feelings of Tamils. I'm ready to bear all the losses incurred by the film," he added.