Aayirathil Oruvan directed by Selvaraghavan starring Karthi, Reema Sen and Andrea Jeremiah in the lead roles hit the screens in 2010. Aayirathil Oruvan was an historical fantasy epic, which got mixed reviews from the critics and the audience.

Selvaraghavan is looking forward to making a sequel to Aayirathil Oruvan. The director himself revealed about his plans on his Twitter page.

My mind is always in A.O 2. I need a break right now but I will make it for sure next year. Let's hear the cholas roar!

Selvaragahavan had mentioned a few years back during the release of Mayakkam Enna that he is ready with the script for Aayirathil Oruvan Part 2. However since he got busy with other project commitments he couldn't begin work on this project. The director has now expressed his desire to start this project next year.

Selvaragahavan after Irandam Ulagam had announced his next project with Simbu in the lead to be produced by Radiance Media. However the project has been put on hold. 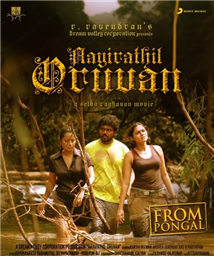