Filmistaan is written & directed by Nitin Kakkar. The film stars Sharib Hashmi, Inaamulhaq, Kumud Mishra and Gopal Dutt. What happens when a cinema-obsessed production assistant is held hostage in a Pakistani border village at the home of a man who is in the business of selling pirated Bollywood DVDs? forms the crux of the film. The film will hit the screens on June 6. 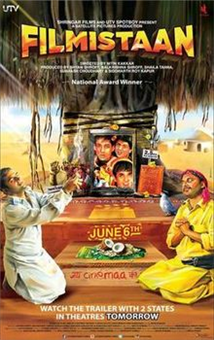