Translating a 10 minute short film into a mainstream cinema is no joke. Balaji Mohan has been able to do it convincingly. Kadhalil Sodhappuvadhu Yeppadi (KSY) has a very simple tale to tell. It is about a young couple who get into battle mode at the drop of a hat. KSY is a collection of the silliest fights that this couple gets into. You might think "Haven't we seen all this before?". Yes, you have. Kushi, Thiruda Thirudi and Unnale Unnale are some films that dealt with the same theme. Where KSY differs is it's simplicity. So simple, that you can relate to the characters on screen.

Siddharth and Amala Paul are just about perfect for the roles. They represent today's younger generation to the T. The two guys who play the friends of Siddharth are so natural and they make it work big time. There is nothing artificial about the performance of any of the actors in the film.

Music by Thaman is good. There are no duets in this urban love story. Another novelty by the first time filmmaker. Nirav Shah (also a co producer of the film) makes his presence felt with his lens work. Though shot mostly in interiors and college campuses, the visuals have a sense of richness about them.

The movie tends to drag a little bit in the second half, in particular the Pondicherry episode. Perhaps the maker felt making a movie lesser than two hours wouldn't cater to the Tamil audiences. You really can’t find any other slip in this debut work of Balaji Mohan. He has been able to hold the audience attention for the most part with an unconventional format of storytelling and a lot of clean humour thrown in.

The target audience of KSY is the urban youth and they are sure to lap it up. A romantic comedy sans lewd dialogues or double entendres, KSY is like a whiff of fresh air. You are bound to leave the cinema hall with a wide smile on your face. 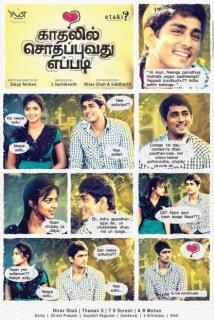