Curtains down for DDLJ at Maratha Mandir after 20 years

The classic romantic film 'Dilwale Dulhania Le Jayenge’ starring Shah Rukh Khan and Kajol had been running in the ‘Maratha Mandir’ of Mumbai for almost 20 years. The iconic movie made its final curtain call Thursday at famous Maratha Mandir here - after two decades. The film after completing 1009 weeks at the Box Office, will be taken down from the theatre.

When asked about the reason behind closing of the shows of the film, he said: "Earlier we had lots of audience to watch this film that included people from abroad. Now there is hardly any audience coming in. "We have 1105 seats in one screen and out of which hardly 100 to 200 seats used to get occupied so it doesn't make sense to run it any longer."

The normal tickets cost of this film was Rs. 20, Rs. 17 and Rs. 15 at the hall, drastically lower than what the multiplexes charge. However he says now the other fresh films will get extra screens. 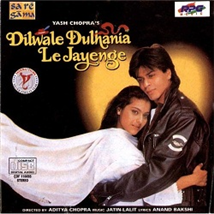