Papanasam Review - Lives up to the original 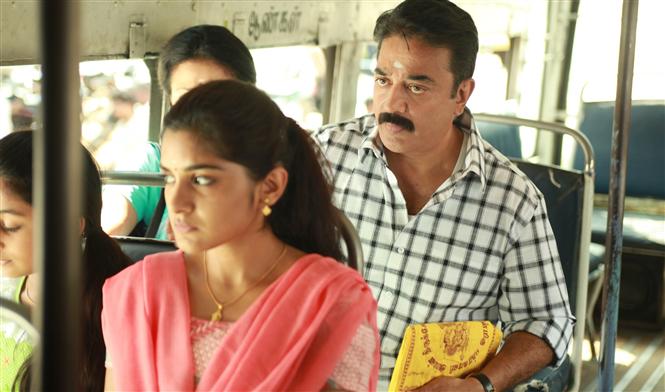 Papanasam is the Tamil remake of Malayalam blockbuster movie "Drishyam". The movie is all about an uneducated family man who goes to extreme lengths to protect his family. The Tamil remake is loyal to the original Malayalam version. Will Kamal Haasan be able to overcome many unfair comparisons to Mohan Lal's stellar performance? Can the director meet his own high bar set in terms of box office success and critical acclaim?

Director Jeethu Joseph's watertight script is undoubtedly the key reason for the success of Dhrishyam. It has been touted as one of the perfect scripts in recent times. Fortunately, the director did not compromise nor tamper the original script in an attempt to suit Tamil audience.

It is a welcome relief to see an edge-of-the-seat thriller in Tamil without resorting to hurried screenplay, unnatural dialogues, forced characterization, abrupt editing, loud background scores to list a few among many other commercial compromises. The director deserves credit for making a nail-biting crime drama with no action sequences or unwanted songs. It is not uncommon for Malayalam film industry which has successfully mastered such narration styles over a few decades. However, it is a welcome sign for a commercial Tamil movie to be narrated in this fashion.

Papanasam is arguably the best remake movie done by Kamal Haasan in his career. This is also the first time during the last 25 years that Kamal has worked with the same director who also made the original. The quality clearly shows in the output. Kamal looks a few years younger with the aid of his mustache. Kamal Haasan speaks in Tirunelveli dialect. With that, Kamal has now officially spoken in all the major Tamil dialects in his acting career. Kamal brings in his uniqueness and originality in portraying the lead character, which was superbly performed by Mohan Lal in Malayalam.

If there is one department that has been executed better than the original version is the casting. The director has made a handful of thoughtful casting changes to suit Tamil audience. The casting changes have enhanced the performance while all the retained cast members kept the success elements intact from its original. Anant Mahadevan has strengthened the last few scenes with his keen understanding of the character and his dialogue delivery. Gauthami in her comeback movie has enhanced the role. Kalabhavan Mani is an excellent choice as the bad cop. MS Bhaskar, Charlie and Delhi Ganesh bring the nativity touch and local flavour. Niveda Thomas as the elder daughter looks better than the casting choice in the original version. Among the star cast retained from original, Asha Sarath as IG and Esther Anil as young daughter ensure that their exceptional performances from original version are replicated in Tamil version.

The movie has only 2 songs composed by Ghibran. Even though the songs are not chart-busters, the situational songs and background scores lend adequate support to enrich the movie. The camera angles and editing stick to the proven success formula from original. Many of the locations, set properties are essentially the same with only minor changes necessary to bring the nativity touch for Tamil audience.

In comparison to the original, one of the very few shortcomings is the lack of consistency in dialects spoken by the lead characters. The characters seem to have a wide range of accents and dialect variations which sometime may be a minor distraction to the viewers. This may be excused to the location in which the story is set.

The other blemish on "Dhrishyam" is the accusation that it is an un-credited inspiration of a Korean movie/Japanese novel named "The Devotion of Suspect X". Even though the movie seems to have borrowed a few key thematic elements and concept of alibi from the source, the movie still stands tall for its flawless scripting and characterization.

Papanasam lives up to the original. Papanasam is strongly recommended even if you had already watched the original version in Malayalam.