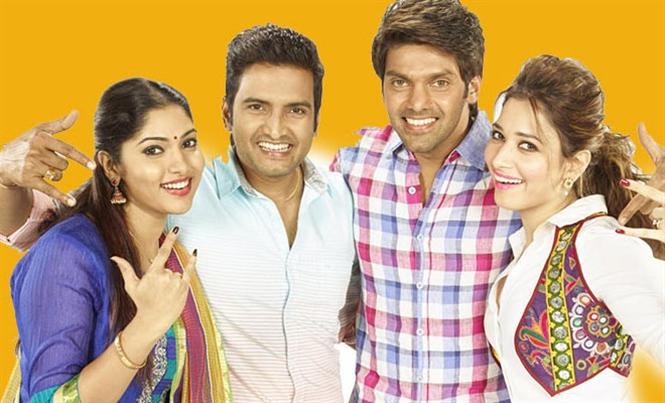 Acronyms, Santhanam with a hero who becomes a sidekick, booze and a cameo from a star. By now you know we are talking about a film by Rajesh. VSOP follows suit.

The male populace has to find a solution to keep their wives away from ruining their relationship with their friends.

Arya once again is not too keen to hog the entire limelight despite VSOP being a landmark film for him in terms of numbers(The actor's 25th film). He repeats his BEB act along with Santhanam who is the unsaid hero in all of Rajesh' films and VSOP is no different. Here he has a pair too. As Vasu and Saravanan both of them do share a visible camaraderie and are fun. It is the monotony that gets to you after a point. Tamanna looks gorgeous and also gets her lines in perfect lip sync. Vidyulekha Raman is effective and despite a track in very poor taste she makes an impression.

Rajesh is possibly running an unofficial film series without a sequel tag attached. From SMS to VSOP the template is almost the same save a few minor tweaks. In a recent interview he had said that he tried telling a story in 'All In Azhaguraja' and that might have backfired. And implementing the lesson learnt to the core he makes sure even the most discerning viewer is not able to find anything close to a plot in his latest offering. The first half is a breeze. In fact it provides some solid fun and the intermission pops up before you hardly realize. The second half just seems to go on without purpose and the jokes have considerably dried by then. Fat people get mocked at. Vidyulekha falling in love with Arya becomes a joke. The only good thing here is that the 'fat joke' is not gender specific and gets extended to Siddharth Vipin as well. The term 'Mokka Figure' is thrown around at ease. It is time films came up with disclaimers like 'This is a work of fiction. There is no intention to hurt anyone based on their appearance'. The fact that a section of the audience enjoys these 'so called jokes' is more disconcerting. It is also unfortunate that the film crew did not credit 'booze' as one of the starrers. It actually gets more screen time than Santhanam and Arya with a bottle in almost every frame.

Rajesh regains some lost ground with VSOP. Not entirely satisfying but some fun nevertheless. 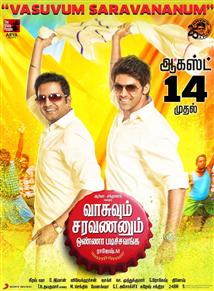