A sellable star without much of an image , Varun is juxtaposed with screen gems like Nawaazuddin and Vinay Pathak. Huma Quershi, Radhika Apte and Yami Gautam lead the ladies brigade with consummate ease and luminescence bringing strength to their parts. While Varun finds it hard understandably to match upto Nawaaz, he does deliver a first time performance for his career and charts a new course for the actor in him. It is Nawaaz however who steals the show and chews up the scenery each time he is on screen.(more)

Brisk and absorbing, concluding differently than expected,Badlapur is an inspired film that dangerously attempts to change the landscape of the thriller genre in Bollywood.

The driving force here are the actors who evolve the story. Varun's measured acting and sincere eyes draw empathy. With each scene, the intense hues he brings to Raghu, unravel. Nawaz is superlative as Liak, bringing a sinful streak of twisted comedy, teaming it with unabashed swagger. The ladies deliver adequately, but it's Huma Qureshi who brings more to her role than what it holds.(more)

BADLAPUR offers you cinematic excellence with a rider that there's violence and gore, which may not be everyone's cup of bitter coffee

BADLAPUR offers you cinematic excellence with a rider that there's violence and gore, which may not be everyone's cup of bitter coffee. You shall be treated to truly unforgettable performances by Nawazuddin and Varun Dhawan. It is a film that will find patrons amidst the multiplex crowd. And yes, it is a film that will continue to live-on in the minds of cinema lovers for a long time to come.(more)

Badlapur is a complete performance driven film. It is one of the best neo-noir representation in Indian cinema. The film has the right amount of gore and will leave its bitter taste on your tongues.(more)

Badlapur might not be in the Ek Hasina Thi and Johnny Gaddar league, but it is a happy sign that Sriram Raghavan has left Agent Vinod behind.

Both Liak and Raghu treat these women like useless chattel, with the latter, who is supposed to be the righteous hero, reveling in forcing them to disrobe and do his bidding. It is his way of settling scores with the men that he wants to punish. The criminal's mother, too, is at the receiving end of constant apathy from a son who could not care less about her feelings. But for all its failings, Badlapur allows most of its actors, even those that play inadequately developed roles, an opportunity to make a mark. Varun Dhawan sheds his lover boy garb and sports a perpetual scowl to express inner turmoil. He pulls it off for the most part.The trouble is that he is up against an actor of the natural calibre of Nawazuddin Siddiqui, who stamps his class even on the most unremarkable moments. Badlapur has a strong supporting cast, with Huma Qureshi and Radhika Apte getting enough footage to make the best of a bad deal.(more)

Don't miss the beginning' because it's brilliant, the rest is missable.

Badlapur feels vaguely familiar because the aesthetic and storytelling are so heavily inspired by modern Korean noir, in which everyday people reveal themselves to be capable of extraordinary cruelty. What Badlapur lacks, however, is their tautness. By the time interval strikes, you realise you've spent the better part of an hour watching a plot that doesn't progress because it wants to unveil a grand surprise to the audience in the second half.(more)

Watch the best of Varun and Nawaz in Badlapur.

This film has some amazing moments and a lot of credit goes to the director and his actors. Raghvan gives them an open field to perform and show their best skills, the magic is obviously in the writing. The film also has its fair share of unnecessary scenes like the sex scene between Raghav and Jhimli, it was not just unnecessary but also unconvincing. Music by Sachin - Jigar works very well specially the song Jee Karda. If you enjoy thrillers then you shouldn't miss Badlapur, you get the watch the best of Varun and Nawaz. (more)

It is a film where an alert policeman spots something through an eye-hole but, a few inches below it, is another opening that could well be a glory-hole. It is a film that broods, and one that refuses to put a fun spin on things, Raghavan preferring instead to put the �dead� in �deadpan.� The last one-third of the film drags a bit -- the final lines of dialogue are jarringly laboured, especially compared to the rest of the film�s flawlessness -- but overall this is a stunning, beautifully crafted film. Like an expensive, gorgeously made revolver you just want to run your hands over even if you don�t dare shoot it. As the curtain falls on Badlapur, any argument on rightness feels both moot and muddy. This is a noir world, its aftertaste like chocolate with 85% cocoa, and the answer is deceptively simple: Who gets right of way? The one in a greater hurry. (more) 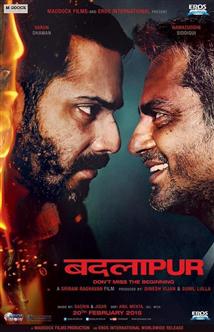