With a shaky script and lackluster making, the film is far from engaging from the word go. It becomes offensive at times with its prejudiced portrayal of women and the derogatory way even something sacred like giving birth has been portrayed. (more)

Entertainer Of The Season

The movie is rich with perfect comical situations and has criticized the attitude of the society towards the sensitive topics including religious beliefs, in a humorous way. Kamal, the director of the movie, is teaming up with Mammootty after a long gap of 9 years. The director has succeeded in conceiving the subject with complete perfection and doubtlessly met the expectations of the audience. (more)

Uttopyayile Rajavu is a movie which can be seen with our family at the theatres to celebrate this Onam.

The screenplay by P S Rafeeq who made us pleased years ago with the screenplay of Amen has once again come up with a very different attempt. But at some places it had become dramatic and very predictable as well. Ouseppachan�s music joins the soul of the film as he managed to give a rhythm which was travelling along with the narration of the story in a smooth way.(more) 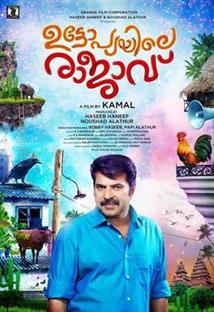