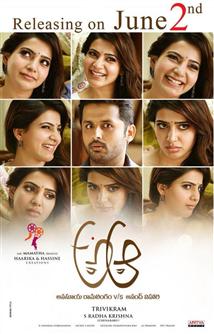 Even though, it is a regular story, Trivikram made a successful attempt with his own style of entertaining the audience. Overall, it is a good entertainment film which has hit the theatres in the recent times.(more)

Trivikram�s core strength has always been writing family drama and dialogues that touch the emotional chord. He has excelled at them.When we exit the theatre, we leave with nice feeling as Rao Ramesh�s comedy dialogues ring in our ears. All in all, �A Aa� is a pleasant movie with good dialogues, beautiful cinematography, nice music, and terrific chemistry between Nithin and Samantha. Watchable for its lighter moments and emotional sequences.(more)

Overall, 'A..Aa..' is an Old-fashioned Family comedy which is a well-wrapped candy

Trivikram once again proved he is the 'Master' and he has narrated a family drama blended with all entertainment factors. The visuals are breathtaking and the gripping narration is a biggest plus. Casting is biggest plus and first half is so good. Anupama is definitely a new talent found and she will be the next big thing. Rao Ramesh scores more in climax. Samantha and Nithiin are the trump card and Trivikram has crafted them perfectly. On the negative side, the second half is a tad slow and in some scenes, we can feel the length is too long. Script also gets too stereotypical as it passes by.(more)

Trivikram once again proves that he is magician of his craft with A..A. The way he has narrated this breezy family drama with some lovable and entertaining elements are major assets. This is a film which will do exceptionally well with the family and overseas audience as the lead pair ensure that things fall in right place. If you ignore the predictable story line, you can take your entire family and watch the magic of Trivikram Srinivas in this feel good family entertainer. Recommended.(more)

A.. Aa� is a pleasant family entertainer that has something for everybody. You may watch it!!

First half of the film is nice. Second half meanders a bit, but a good climax followed by punch dialogues of Rao Ramesh makes you feel good as you step out of the theater. Plus points of the film are Trivikram dialogues, Samantha and emotional scenes. On the flipside, the flashback of the film which is the foundation looks little hazy and the pace in second half should have been faster. On a whole. A.. Aa� is a pleasant family entertainer that has something for everybody. You may watch it!!(more)

We get to see some great visuals from the lens of Natarajan Subramanian and Dudley. It looks very colorful setting the mood of the film right. Mickey J Meyer�s songs are passable and could have been better. None of the songs actually leave an impact and it is mostly saved by the flashy visuals(more)